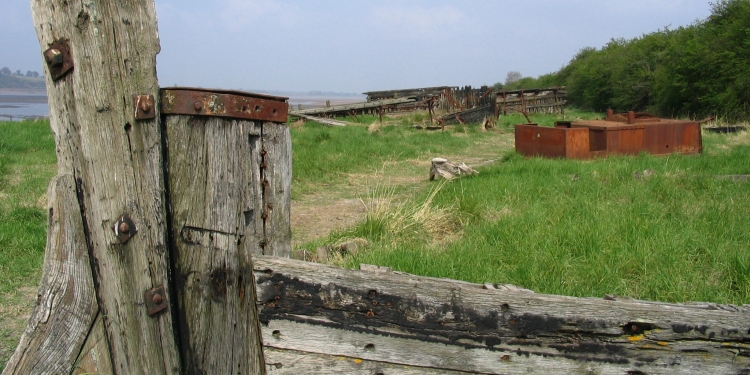 Actually nearer the small village of Purton, many boats lie in the mud on the banks of the Severn, some concrete hulled boats still remain in good condition today, while the wooden ships slowly rot away. In the middle of the Severn the wreck of an old cargo ship which sunk can be seen on low tide.

This is an outdoor location and fully accessible on a public footpath.

The canal linking Gloucester and Sharpness docks is said to be 16 miles long, 16ft deep and to have 16 bridges. In fact it was originally 18ft deep in the centre to accommodate the keels of large sailing ships, but in later years it was not dredged to the full depth. Most of the southern half of the canal is embanked so that the water level is above the general level of the surrounding land.
These banks have periodically caused concern to successive engineers, at one point many boats were grounded along the bank to minimise erosions, the shells of these boats still remain today. The embankment also has a fortunate consequence that boaters on the canal or walkers along the towpath can enjoy extensive views.
During a low tide one point of interest from the towpath is the sunken remains of a tanker which collided with the Severn Railway bridge in 1960. This collision also marked then end of the bridge. The bridge was built in 1870s to allow coal from the Forest of Dean to be brought across the river to Sharpness to provide an export cargo and fuel for steamers. It had 21 spans supported on piers across the river and a swinging section across the canal that opened to allow vessels to pass. Two tankers collided with one of the piers in the river on a foggy evening in 1960 and brought down two spans of the bridge, the rest was later demolished, all that now remains is the masonry of the swinging section on either side of the canal.

Here's a late evening drone flight over the ships graveyard at Purton, Gloucestershire.