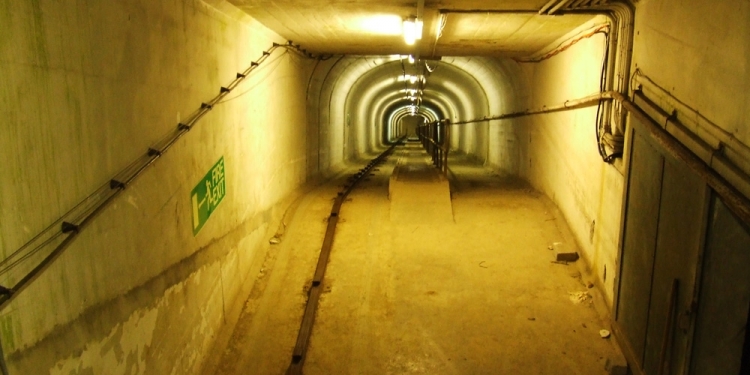 Tunnel Quarry was one of the four sub-depots of the Central Ammunitions Depot, parts of the converted Bath stone quarry are still security classified sites today. The quarry connects to the northern edge of Spring Quarry and also had a link to the GWR main line at the eastern portal of Brunel's Box Tunnel.

This is an active Ministry of Defence site.

Located South-East of Bath, Tunnel Quarry forms part of the converted stone quarry tunnel complex beneath JSU Corsham (formerly known as RAF Rudloe Manor).
The quarry was acquired by the War Department after being used to extract building stone for the last century. The quarry was extensively converted, regular storage bays were created, the floor was flattened and air conditioning and lighting was fitted through out.
The regular conditions were needed as Tunnel Quarry formed part of the Central Ammunition Depot, an amazing labyrinth of tunnels and chambers, around one hundred feet below ground covering an area of around 200 acres in four sub-depots, which between them housed over 350,000 tons of ammunition.
At the eastern portal of Brunel's Box Tunnel, a branch line from the main London to Bristol railway line leads into the heart of the depot and terminates at a half-mile long underground railway station. Most of the underground area is now abandoned. The quarry is still strictly controlled by the MOD as several areas are still classified including the Command and Control Computer Centre (CCC) in the eastern part of the quarry, which is accessible via lift from a discreet bunker style entrance in Peel Circus. Another area known as South-West Control is also still in use at the opposite end of the quarry, this area was originally set a side as storage district 1 but it was never converted, it was later converted it to a telephone exchange and switching room, it's current day use is unknown.