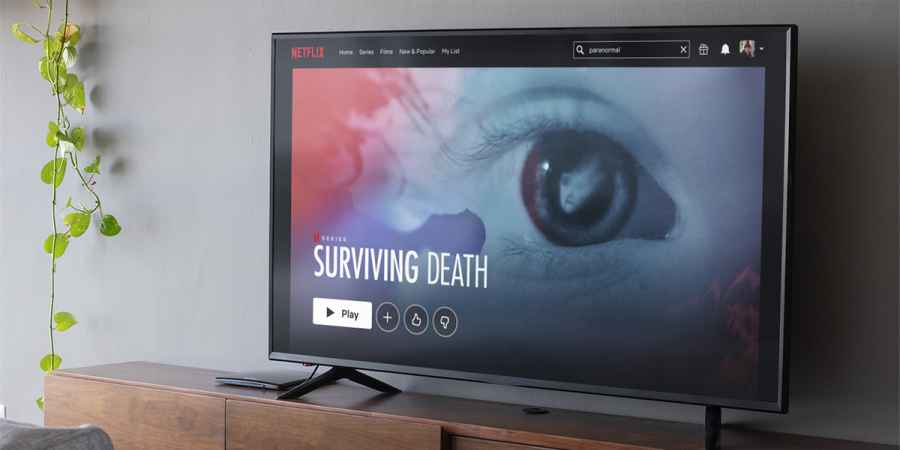 Netflix has a whole host of paranormal entertainment in 2021, including supernatural documentaries, chilling ghostly drama series, and creepy horror movies.
The streaming platform is the perfect place to binge watch shows like 'Stranger Things', 'The Haunting Of Hill House', and 'The Vanishing At The Cecil Hotel'. You'll also find plenty of movies, including flicks from 'Insidious' franchise and the ghostly favourite, 'The Conjuring'.
Below is a list of paranormal shows and movies that are trending on Netflix right now, plus the biggest supernatural releases from the last 12 months, and expected upcoming releases later in 2021.

'Behind Her Eyes' is a gripping British series which follows a single mother who enters a world of twisted mind games when she begins an affair with her psychiatrist boss. The series may not seem like a paranormal series at first glance and we can't say too much because we don't want to ruin the twist, but if you love supernatural thrillers then stick with this one because all is not what it seems.

This paranormal documentary series landed on Netflix in January. Created by director and executive producer, Ricki Stern ('Reversing Roe', 'Joan Rivers: A Piece of Work'), and based on best-selling author and journalist Leslie Kean's book, 'Surviving Death' is an in-depth investigative series exploring the possibility of an afterlife.

Over six episodes, Surviving Death explores questions that have been contemplated throughout time: What does it mean to die, and is death the end of our existence? Weaving together innovative new research with firsthand accounts from those who’ve been close to—and even experienced—death, the series takes viewers on an extraordinary journey into a world beyond human existence as we know it.

Crime Scene: The Vanishing At The Cecil Hotel

The series is more of a true crime documentary than a paranormal series, but since its based on an infamous haunted location and also investigates the possible paranormal causes of a very famous haunting, the series is well worth a watch for any fan of the paranormal.

The series explores the mysterious disappearance and subsequent death of Elisa Lam during her stay at the sinister Cecil Hotel in Downtown Los Angeles. Throughout its history the Cecil Hotel has always had a dark persona. It has recently been thrust back into the limelight in a 'Ghost Adventures' special which saw Zak Bagans and his team try to find out once and for all exactly what happened to Elisa Lam at one of LA's most nefarious settings.

The fourth season of the show was originally due to drop on Netflix last year, but the release was pushed back due to the global COVID-19 crisis, which temporarily halted production of the show. Although we don't yet know a new release date for the next season, we do know that it is due some time this year.

The last season wrapped up the story with the gang going their own separate ways, so we were left wondering where the fourth instalment would take place and which of the cast would return.

An earlier trailer for the fourth season included the strap line "we're not in Hawkins anymore." This 'Wizard Of Oz' reference implies that 'Stranger Things' is making the expected move to setting the next season outside of Hawkins.

The Haunting Of Bly Manor

Although the new season, entitled 'The Haunting Of Bly Manor', shares a production team with the first, the second season focused on a completely different story based upon Henry James' 1898 psychological horror 'The Turn Of The Screw'. The strange and sinister story unfolded from the perspective of Dani, a young American tourist who is hired to take care of two orphan children living in an old English country mansion.

In 2020 Netflix revived the much-loved US series 'Unsolved Mysteries'. The first half of the series landed in the summer, with more episodes dropping on the streaming platform at the end of last year. Amongst the new episodes were unsolved cases relating to a mass UFO sighting and a haunting.

The original award-winning television series ran from 1987 and notched up almost 300 episodes documenting cold cases and paranormal phenomena, including stories such as that of the legendary Roswell UFO incident of 1947. It was the first mainstream television series to feature this story, which is now one of the best known UFO cases of all time.

The show was brought back to life for Netflix last July by Shawn Levy, the executive producer of the hit series 'Stranger Things', working alongside the show's original creators John Cosgrove and Terry Dunn Meurer.

'John Was Trying To Contact Aliens' dropped on Netflix last year and charts the rise and fall of one man's solo mission to make contact with alien civilisations by transmitting messages into space for more than 30 years.

Growing up in rural Michigan, John Shepherd was a fan of classic science fiction shows like 'The Outer Limits' and 'Twilight Zone' and encouraged by his grandparents, the self-taught electronics engineer founded Project STRAT (Special Telemetry Research and Tracking), eventually converting their house into what John described as "a mix between a high-voltage accelerator laboratory and a radio station". His aim was to obtain hard scientific evidence of the existence of alien lifeforms.

The Chilling Adventures Of Sabrina

Fans of both 'Riverdale' and 'Stranger Things' will most likely find a lot to enjoy about 'The Chilling Adventures Of Sabrina'. You've probably seen Sabrina, the famous teenage witch, in action before — but never quite like this. Based on the popular Archie comic book series of the same name, 'The Chilling Adventures Of Sabrina' follows Sabrina Spellman as she tries to balance her high school responsibilities and social life with her "dark education" — as a half-mortal, half-witch, she's got a lot to learn.

The series launched with part one, consisting of 11 episodes, in 2018 and kicked off just before Sabrina's 16th birthday, when she is supposed to go through with her "dark baptism" and pledge her loyalty to the Dark Lord. But it's not an easy decision for Sabrina. She struggles to choose between her mortal life, with her family and friends, and her magical life. But when she makes a reckless decision at the last moment, she ends up facing supernatural threats that she never anticipated.

Since there have been a further three parts released. Part four dropped on Netflix on just before the new year. In part four Sabrina's new normal quickly dissolves as menacing spirits set their sights on Greendale. In a battle of supernatural wits, who will be left standing?

'American Horror Story' is a supernatural horror series. The ninth season of the show entitled '1984' was released onto Netflix in 2018, the tenth season was announced shortly after but its release was pushed back to 2021 due to production being stalled because of the ongoing COVID-19 pandemic. There's no date for the return of the show yet, but now filming has been resumed, we're hoping it's still on track to return this year.

The 'Paranormal Activity' series of movies seems so real because of the way it's shot using consumer devices like camcorders, phones, laptops and security cameras. In the first movie Katie and Micah suspect their house might be haunted and place a camera in the bedroom over night. The activity starts off slowly and very realistically but the dark force that's haunting them soon gets much more sinister.

The first film in James Wan's Conjuring series is available to watch on Netflix now. The 2013 movie is based on the case files of two of the most famous paranormal investigators of all time, Ed and Lorraine Warren.

The movie starts with an introduction to the Warrens, who in the movie are played by Patrick Wilson and Vera Farmiga. The story of 'The Conjuring' revolves around the real life story of the Perrons who lived in a farmhouse in Harrisville, Rhode Island. Carolyn and Roger moved into the house in 1971 with their five daughters Andrea, Nancy, Christine, Cindy, and April.

The family start to experience paranormal activity and eventually discover that it is haunted by a former resident named Bathsheba Sherman, who was born in 1812. Local legend states that she was a witch and Satanist and that she laid down a curse that anyone who lives on her land in the future would die a terrible death.

There are four Insidious movies in total, currently the first two are available on Netflix. These two films are based around a married couple, Josh and Renai Lambert. The first tells the story of the couple's son, Dalton, who is trapped in a mysterious comatose state. Unbeknown to his parents, the boy has become a vessel which spirits from an astral plane can use to enter our world. As a result of this, the family's home is haunted by demons. The family call upon psychic, Elise Reiner to help them, she brings along her paranormal investigation team of Specs and Tucker.

In the second movie, 'Insidious: Chapter 2', the family move into Josh's mum's house, where Renai and the others begin to experience paranormal activity.