'Dark Fall: Ghost Vigil' is without a doubt the perfect game for any armchair ghost hunter. Developed by Cornwall-based production company, Darkling Room, the game offers a realistic point-and-click ghost hunting experience and an immersive supernatural adventure.
The game drops you in the deep end as a new recruit with the fictional Oxford Paranormal Group. It's time for you to embark on your first all night vigil. You've been assigned to the attic of the very haunted Harwood House, but you'll be expected to keep an eye on static cameras placed around the house in the hopes that you might be able to get undeniable evidence of the paranormal.
Although you're on a lone vigil, you'll be in contact with the rest of the OPG team via walkie talkie throughout the night.
The game allows you to explore the derelict building, a house that looks like a dream location for any urban explorer, let alone ghost hunter. Just like any good urbex location, Harwood House hides plenty of dangers, from asbestos, lead poisoning, and tetanus.
The ghost hunting elements in the game are very realistic and feature real paranormal equipment, including thermal imaging cameras, K-II EMF meters, night vision cameras and digital audio recorders - perfect for capturing electronic voice phenomenon (EVPs). As a new recruit, your team members will give you tips and guidance on using this kit via the radios.
There's also lots of nods to real-life paranormal phenomenon, including orbs, light anomalies, and temperature drops. As well as familiar paranormal paraphernalia, including Zener cards and the infamous 'crying boy' painting. 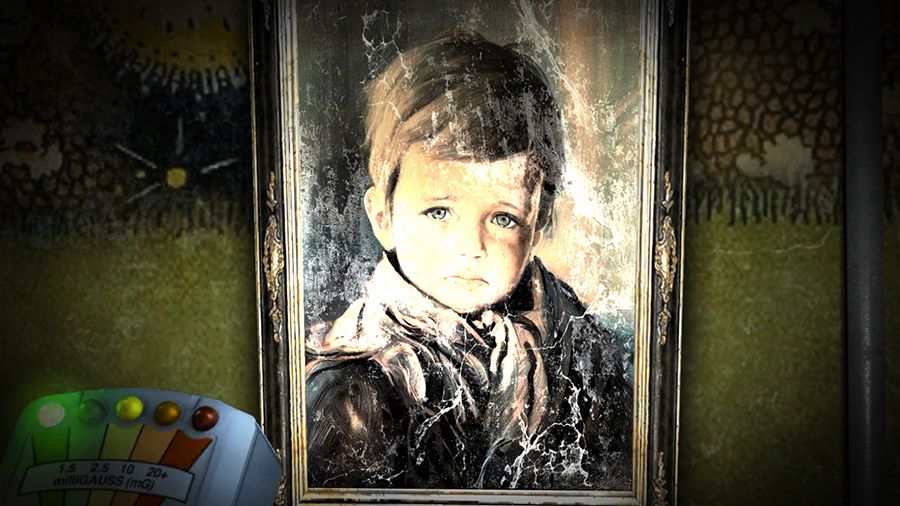 The game boasts an immersive soundtrack in surround sound, and real audio evidence captured during ghost hunts, and gives you the chance to conduct a series of paranormal experiments as you uncover the secrets of the hauntings at Harwood House, through flashbacks to the past presented through the supernatural phenomenon of time slips.
Any ghost hunter longs for a location with plenty of ghost stories and a good history, and the Harwood estate is no different. The house was built in 1747, as a country home for Lord Harwood, his wife and young son, Edgar. The estate was modest, stretching to a few dark wooded hills, deep in the Oxfordshire countryside. The property resembles the real-life paranormal hotspot, Woolton Hall in Liverpool.
A tragedy occurred, in 1749, when Lord Harwood lost his son to scarlet fever. The house was passed from one owner to another, until it became a hotel, a maternity hospital, and eventually, in 1968, a children's home known. Since that time Harwood House has been empty for four decades... or so it seemed.
Although the game successfully recreates some of the monotony of sitting around waiting for something to happen on a ghost hunt, as the events unfold in a fictional world, you're guaranteed to experience some activity during your investigation.
If you're feeling brave enough to join the small band of ghost hunters, then download 'Dark Fall: Ghost Vigil' now. It is available for Windows now via the Shadow Tor Digital Store and Steam, but the developers say to look out for announcements about releases on other platforms soon.
Tags:
paranormalgamingtopicaldarkling room