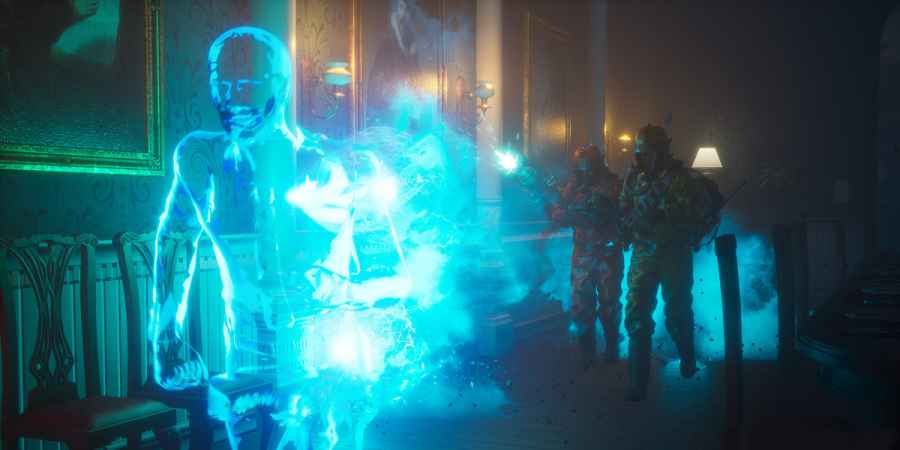 First unveiled in 2019, a new ghost hunting themed game which gives players the chance to play a paranormal game of hide-and-seek finally gets its full release. The game's final pre-release trailer recently dropped ahead of its March 31 release date.
If you can't get enough ghost hunting in your life, then 'Midnight Ghost Hunt' is for you. The multiplayer game allows friends to play together online as they take on the role of either a ghost hunter or a ghost. Players go head-to-head in an explosive, four-minute-long, spectral battle.
In the four-v-four player battles, ghosts can hide in plain sight by possessing inconspicuous furniture and other objects, before hurling themselves at the invading hunters armed with ghost-busting laser guns.
The hunters are equipped with various gadgets that will help them track down and exterminate all of the ghosts before the clock strikes midnight.
At midnight, if all the ghosts haven't been destroyed, then the tables turn. All the dead ghosts will return as vengeful spirits, and the hunters become the hunted. They must try to survive the ghost onslaught until they can escape.
'Midnight Ghost Hunt' will allow spooks and hunters to battle it out at various locations, including the atypical spooky Victorian mansion plus a haunted museum, an eerie pirate's cove and a creepy hospital.
When the game was first announced at the 2019 Electronic Entertainment Expo in Los Angeles, it sounded quite unique. Since then 'Ghostbusters: Spirits Unleashed' has been announced, which will offer players a similar style of gameplay, but set within the 'Ghostbusters' universe.
Both games offer an asymmetrical multiplayer experience, which basically means that different players have totally different roles and capabilities, in the case of 'Midnight Ghost Hunt' and 'Ghostbusters: Spirits Unleashed' that means you can play as a ghost hunter or as a pesky poltergeist.
The game's developers, Vaulted Sky Games, is a new indie game studio founded by former visual effects artist Samuel Malone in 2018. The small team have a love for multiplayer and believe that the very best gaming experiences can be derived from engaging with others all around the world, connecting and sharing in their favourite form of escapism.
'Midnight Ghost Hunt' is available for PC on Steam now or find out more about the game at midnightghosthunt.com.
Tags:
gamingparanormaltopical