Ghost Moves A Bed On Most Haunted Halloween Special

If Yvette Fielding and her fearless ghost hunting team were ever going to capture any evidence of the paranormal, then surely it would be on Halloween night.
Well viewers who tuned into to watch the two-hour long investigation of Croxteth Hall in Liverpool last night weren't disappointed. The house is said to be haunted by numerous ghosts which have been sighted by visitors to the property, many believe the manor is haunted by the spirit of a former resident, the second Earl of Sefton, William Philip Molyneux.
The standout moment of the episode was when Karl Bettie, Yvette's ghost hunting partner and husband, was alone in a bedroom on the upper floors and a heavy metal bed slowly slid across the wooden floor, seemingly with no one touching it.
Karl said, "woah! I'm sure that bed just moved, I'm sure it did." He investigates the bed, and moves the camera around it showing that there's no one behind it or underneath it.
Karl then left the bedroom and went out into the corridor and moments later heard a crash come from inside the room. Talking to himself on camera, Karl said, "there was a noise from that room again, I really don't even wanna go in it".
But reluctantly Karl did re-enter the room and was confronted by this mess, "what the?!? That wasn't like that when I left it". The room had been trashed. 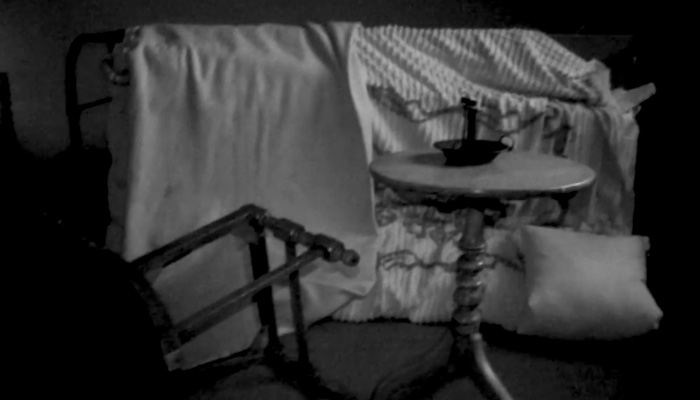 After examining the room, Karl headed downstairs to meet the rest of the team where he explained the happening to them, "it was most bizarre thing ever, it's blown everything else out of the water."
Karl took Yvette and the gang back to room where he'd captured the bed move. The show's two camera men, Stuart and Gregg moved the heavy bad back into position and tidied the room.
Stuart then asked Karl what he thought about the bed moving, "to be honest, for the first time ever I don't want it to be paranormal. And the reason I don't want it to be paranormal is because both you guys you went to move that bed and you know how heavy it is. If something can move that bed so precisely, that bothers me because then you think, what can it do to a person?"
The show's skeptic Glen Hunt said, "it's just a head f**k because there is no rational explanation for it, is there. And the fact that you can't reason with it but it really happened. You're just pulling your hair out because again it doesn't give you any answers, it just gives you more questions."
If you missed the Most Haunted Halloween Special, then you can watch it back, as well as the second part of the investigation at Croxteth Hall on demand on the UKTV Player.
Read the full review of this episode, or for more reviews of all of the new episodes, plus highlights and evidence from the shows, and to find out when Most Haunted is on next, visit the Most Haunted episode guide.