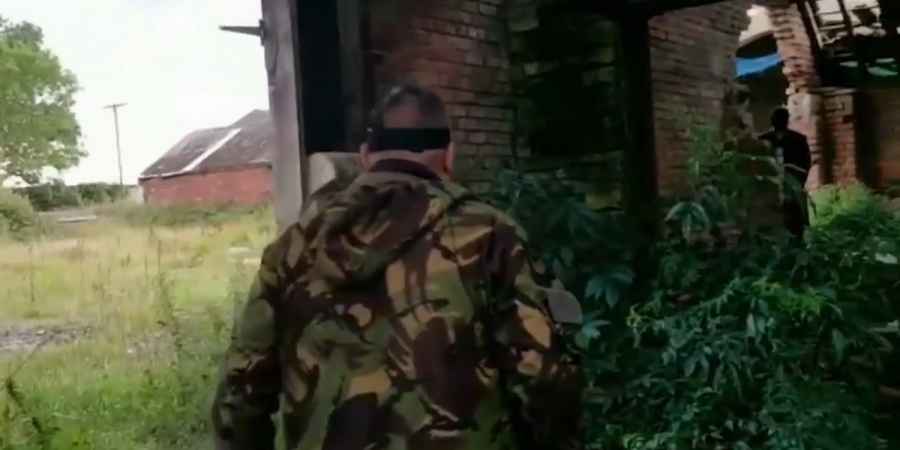 This week 'Unexplained: Caught On Camera' returns with more ghostly goings on and bizarre incidents all captured on CCTV, on mobile phone by members of the public, or on camera by paranormal investigation teams.
Working out whether these remarkable clips are truly unexplainable or not is the show's regular panel of experts consisting of Jayne Harris, Ciarán O'Keeffe, Barri Ghai and Deborah Davies. The mix of skeptics and believers will give their opinion throughout the show on the weird clips they're presented with.
In the show's ninth episode we meet a man in Michigan who demonstrated his abilities to control spirits, two investigators in Surrey have a fright they weren't prepared for while ghost hunting, skeletons in the closet in Canada and the urban explorers in Yorkshire who capture a sinister figure on camera.

In the episode we meet Matt and Andy, a pair of urban explorers from Yorkshire. They started out running a metal detecting channel on YouTube called Finders Beepers, which is grown into an urbex channe, and lead them to explore such iconic locations as the Paris catacombs.
In one investigation the pair visited an abandoned collection of dilapidated buildings which they dubbed "the Suicide Farmhouse". While exploring the ruins they inadvertently captured an imposing dark figure stood silently watching them.
The pair didn't notice the figure at the time, but the shadow man was hard to miss when they came to editing the footage. They said, "when I came to edit it, I was really shocked what was in the background. There was a really large man, totally blacked out, it was like a silhouette."
Deborah said, "shadow figures are most often not seen by the naked eye, but always the camera will pick them up", but Jayne isn't sure if this is an example of a shadow figure. She said, "shadow figures are believed to be impressions or imprints of the living, once the living have passed, but I think this is a spirit. I think that this is something that is absolutely aware of the two of them. It appears to be watching them."
Ciarán added, "there could be a number of possible explanations that's going on here. It might actually be a person that's causing the figure or it could be a form of pareidolia."

Pareidolia is a psychological phenomenon where we perceive patterns in random data. The most famous examples of this are the image of a man on the surface of the moon, shapes in the clouds, and even the image of Jesus on a piece of toast or the Shroud of Turin.
This principle can explain some photographs and videos of ghosts, the human eye sees a face or human form in abstract elements of a photo. This can also happen with the naked eye, when someone sees a shadow as a human shape.
Our tendency to spot figures, and more specifically faces, in random patterns is said to date back to early humans when spotting the face of a potential threat from a distance or in poor visibility was an important survival instinct.

Rick The Ghost Whisperer From Michigan

We also meet a Michigan man named Rick in the episode. He claims to have a special connection to spirits. The first bits of evidence caught on camera was a window shutter opening be itself on an abandoned house. This prompted him to start researching his abilities more and began to capture voice recordings in the form of EVPs. Electronic Voice Phenomenon is the belief that spirit voices can be captured or heard through an electronic device, most commonly an audio recorder.
Rick discovered that not only could he communicate with spirits, but he could control them. He found that he was able to get the spirits to perform tasks on command.
Barri said, "I'm always skeptical about watching video clips, especially ones that you see on YouTube and uploaded on the internet, but these particular clips have something unique about them. He seems to be able to communicate with spirits and they are responding intelligently on commands."
But Ciarán isn't convinced, he said "I think what we're seeing is either simple coincidence or that we're not seeing the full gamut of footage where he asked for spirits to move things and it doesn't happen."

Next up we meet Jeff Young the founder of Ghosttech Paranormal and his co-investigator, Phil. In the video featured in the show we see the pair investigating Englefield Social Hall. The hall was built in 1880 and over the years has had several uses, including as a shelter during the war. Today it is used as a community centre by day, but at night the building is said to come alive with echos of the past, including the ghost of an old lady who has been seen walking room to room.
Their investigation started with three strange and unexplained knocking sounds coming from the stage, this was followed by banging from inside a cupboard. Later they caught doors moving on camera and even heard footsteps running towards them on camera, the terrifying sound was captured on camera. They even caught what appeared to be a dark figure on camera.
Ciarán says, "I'm skeptical about all of the footage because it's not in a controlled environment, so when we hear any noises for example or a shadow, we can't be 100% sure where everybody is in the building and therefore somebody else might have cause the phenomenon either deliberately or without anybody else knowing"
But Barri has a different explanation, "they could be sounds that have been absorbed, perhaps into the fabric of the building, but in this particular case it seems that there's something there that's intelligent trying to communicate with both those investigators."

Finally we meet Canadian paranormal TikToker, Kathy, who also posts her creepy videos on her YouTube channel, Paranormal Nightmares. We see a whole host of strange goings on in Kathy's house, including a cupboard door which seems to open by itself, before the clothes inside violently swing forward.
Deborah thinks that Kathy could be being haunted by a poltergeist, she says, "they're known for moving things and creating a little bit of chaos in the home. Sometimes paranormal activity can be experienced at a heightened level because it's feeding off of someone's energy."
'Unexplained: Caught On Camera' continues next week on Really as part of the channel's #Freakend event, bringing viewers three nights of paranormal entertainment every Thursday, Friday and Saturday.
You can watch in the United Kingdom and Ireland as part of the Discovery family of channels. You can watch Really on Freeview (17), Sky (142), Virgin Media (129) and Freesat (160), plus YouView, BT TV and TalkTalk TV. Or watch previous episodes on demand on Discovery+.