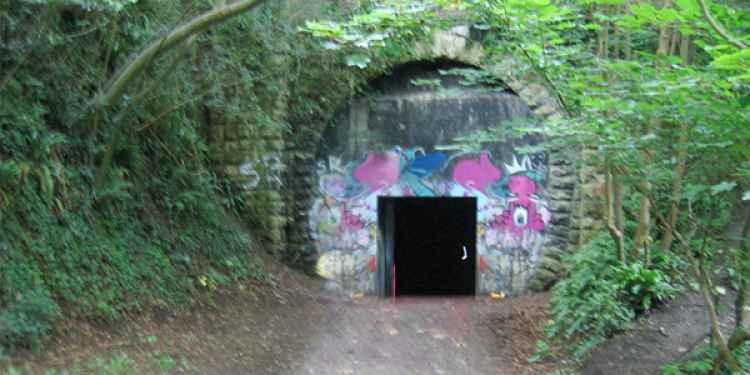 A mile long railway tunnel on the Bath extension line of the Somerset and Dorset Joint Railway, which ran between Midford and Bath Queen Square until 1966.

The tunnel is open and lit as part of the cycle path between East Twerton and Oldfield Park.

The mile long tunnel between Midford and Combe Down Tunnel was built in 1874 as part of the Bath extension of the Somerset & Dorset Railway.
The tunnel has no ventilation along its 1 mile length, at the time of construction it as the longest un-ventilated tunnel in the UK.
The lack of ventilation, on occasions caused problems to slow moving trains. In on instance a train's driver was overcome by smoke, on exiting the tunnel the train crashed in to a goods yard, killing the driver and two railway employees in the yard.
The tunnel is now part of a proposed scheme to create a 13 mile shared cycle and footpath from Bath.
The tunnel will be opened, paved with a cycle-friendly surface, mobile phone coverage and an innovative low energy, bat-friendly LED lighting system, operated by motion detectors.
Known as the Two Tunnel Project, the path will follow the disused railway from East Twerton to the Devonshire Tunnel via Oldfield Park in Bath. Next the path pass under Combe Down Tunnel and on to Midford.
It is hoped that the tunnel will be open by summer 2012, however for the past few years volunteers have opened the tunnel up for the public to walk through by torch light.
The tunnel eventually opened as part of the Two Tunnels Project cycle route in April 2013.
Tags:
undergroundwiltshireurbex