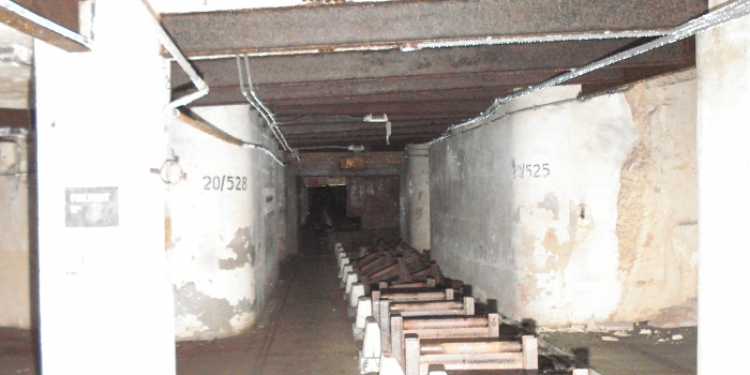 This former Bath stone quarry was converted in to a sub-depot of the Central Ammunitions Depot. The site consists of two areas, the main storage area - districts 12 to 18 and connect via a drift, districts 19 and 20. Each storage district was divided up in to numbered storage bays, passage ways were fitted with conveyor to transport crates of ammunition around the mine.

This site is in private hands and parts of the quarry are occupied by a secure storage company, the rest of the quarry is sealed for security.

In 1881 the hills on the North Western side of Monkton Farleigh village were quarried for Bath Stone. By the time the quarries closed in 1930 the whole of the hill was riddled with roughly 300 acres of tunnels.
During the build up to WW2 the War Department decided that there was a need for a large underground ammunitions store. It was decided that the required space could be obtained by converting four quarries, these four formed what was collectively known as the Central Ammunitions Depot Corsham. Monkton Farleigh mine was acquired and became the biggest of the four sub components, a total of two and a half million square foot was converted.
The three other sub-depots were Tunnel Quarry at Corsham, Eastlays Quarry at Gastard and nearby Ridge Quarry.
Extensive conversion work was carried out at Monkton Farleigh, existing slope shafts were adapted and four new slope shafts were sunk. Above each of these slope shafts and loading shed building was built. Two service hatches and many air shafts were driven down in to the workings.
The site was served by an aerial rope way which transported the ammo cases from the main GWR line at Ashley. The rope ways needed to be replaced due to its vulnerability to attacks from air. A straight tunnel was bored stretching over a mile underground between Monkton and Farleigh Down Sidings.
The depot was gradually completed and filled with ammunition district by district until its completion in 1941, it was able to hold up to 120,000 tons of ammunition.
Huge amounts of funds were pumped in to the site after the war to maintain its condition until 1960 when it was decided to be surplus. The site was run down over the next few years while the last of the ammunition was depleted.

Monkton Farleigh Bunker Busted. The term "busted" got the makers of this video a lot of flak. People tend to use the term "urbex" these days. However, the explorers didn't actually break and enter or "bust" their way in, they simply walked in through open door, gates, holes in the ground.

The Complete History Of Monkton Farleigh

In 1996 the main part of the mine was acquired by Wansdyke Security, a secure warehousing business, specialising in the secure storage of documentation. The company had been operating from near by Brocklease Quarry since 1954 and another ex-war department quarry, Westwood since the mid-eighties. The company offers secure storage solutions to government departments, local and health authorities, defence and blue chip companies from the financial and commercial sector, as well as a wide range of industries and professions.
Wansdyke Security have secured their areas of the quarry and sealed them off from districts 19 and 20. The fate of districts 19 and 20 is uncertain, they now lay empty and decaying still in the hands of George Backhurst. This area of the quarry is closely watched by Stephen Weeks, a business man with grand designs for the former ammunition store. His wild plans involve building a replica of Bath’s Roman spa underground. As Bath is so congested he believes that tourists will flood in to see his replica with the offer of ample parking.
As for Farleigh Down Tunnel, the mile long tunnel leading to the depot, this now lays empty and disused, plans for this area included a mushroom farm, a recycling centre and paddocks but all of these plans have failed due to planning restrictions leaving the tunnel to slowly deteriorate.
The secure storage facility at Monkton Farleigh is still surrounded by a certain air of mystery and speculation. Wansdyke are understandably very paranoid about access to their storage area. I contacted them during the research for this project and they were very unwilling to help in anyway. In recent months Wansdyke Security have also been contacted by the BBC, an author as well as may individuals and groups who are interested in a tour of this piece of history. This cagey attitude towards public has caused some to come to the conclusion that there is more to the site than meets the eyes. As to what really goes on there we will never know, do they really just store people’s bank details and house deeds or are there links between Wansdyke Security and the government?
During the site’s time as a museum a Russian diplomat demanded a tour of the attraction, he demanded that it was closed to the public for the day and he was given an exclusive extensive tour of it alone. The diplomat asked to see every area of the ammunition store and refused to believe that he had seen the whole sight. He was convinced that the museum was a cover for something more sinister. He left at the end of the day still convinced that down a dark tunnel somewhere was a government office or a secret storage area.