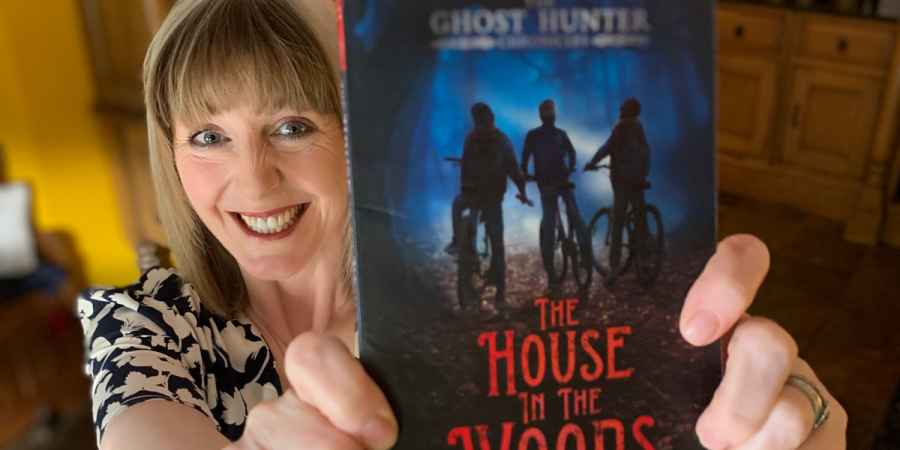 Television ghost hunter, Yvette Fielding, reveals the cover for her new book 'The Ghost Hunter Chronicles: The House In The Woods' as she sees the completed book for the first time.
Packed full of ghosts, wartime secrets, and of course plenty of scares, 'The House In The Woods' is the first book in her new series for children, 'The Ghost Hunter Chronicles' and it's available to pre-order now ahead of its September 30 release.
Yvette could hardly contain herself in a YouTube video posted online which showed the moment Yvette saw the final version of her book for the first time. She said, "I am so excited, my brand new books from Anderson Press have arrived."
She excitedly began to open the box, and tells us, "I haven't even seen it. This is it, this is the first time I'm actually going to see these books."

The cover gives off spooky 'Stranger Things' vibes and sets the tone for a dark and eerie story, which unfolds in the middle of Epping Forest on Halloween night, aimed at brave kids and young adults aged 11 and up.
The book follows three friends, Eve, Tom and Clovis, who venture into an abandoned house in the woods to use a Ouija board for the very first time, but what starts out as three 13-year-olds trying to have a spooky night of fun on Halloween transcends into something much more sinister when the gang unleash a distressed spirit that follows them home and begins haunting the three of them.
Before long the friends find themselves caught up in a series of supernatural events beyond their wildest imaginations and, at times, worst nightmares. With the help of Uncle Rufus, who happens to be a professor - and of course their trusty friendly bulldog, Boris - the friends begin their journey as ghost hunters.
The thrilling, spooky series, published by Andersen Press draws on Yvette's 20-year career in the paranormal field to make the frights in this book as chilling as possible. She said, "most of the things that Clovis, Tom and Eve experience of the supernatural kind is similar to what I've experienced whilst investigating the paranormal."
Speaking about the paranormal activity in the story, Yvette said, "much of the phenomena that I write about in the book I have experienced first-hand; knocking noises, poltergeist activity, objects flying through the air and hitting me on the head, I've experienced them all."
As the book's title suggests, 'House In The Woods' isn't going to be the last we've heard from 'The Ghost Hunter Chronicles', the kids' adventures continue in a second book in the series which is due to be published in 2022.
Yvette recently gave fans their first taste of the book in an online reading, which set the tone of the story as she read several pages from the book that describe a terrifying spectral encounter.
You can pre-order your copy of 'The Ghost Hunter Chronicles: House In The Woods' on Amazon now before the book's release on September 30, 2021.
Tags:
most hauntedbookstopicalparanormal