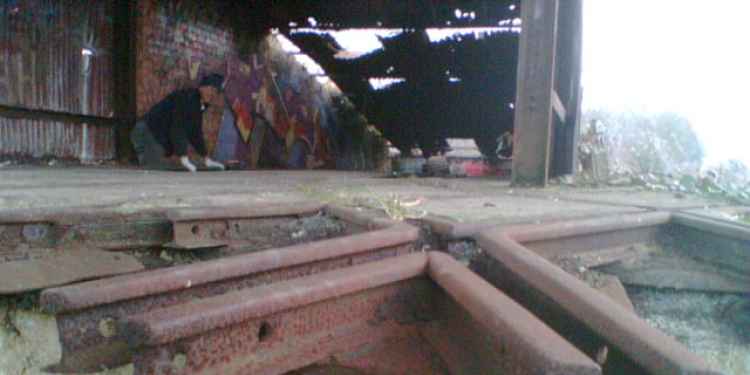 Farleigh Down is a tunnel connecting the Monkton Farleigh ammunition depot with the main line railway at Ashley. The tunnel is over a mile long and straight. A conveyor belt was used to move the ammunition underground between the top of the hill and the main line. The tunnel is so shallow in some places that it can be seen from across the valley as a strip of dry uncultivated grass.

As part of the war effort a large stone quarry in Monkton Farleigh was converted in to an ammunition depot, the depot was situated under a hill top, a mile away and 450 feet above the old quarry stone yard sidings on main GWR line at Ashley, this was the main source of the ammunition. Sidings existed on the site since 1881 when a tramway from the quarry brought stone down the hill for shipment on the GWR. Alternative means of transporting the ammunition was required due to poor road access, this was because by road it was a 4 mile journey through winding lanes between the depot and the sidings.
In November 1937 a 300 meter long platform was constructed upon which a narrow-gauge track could be used to move ammunition carts. Although the initial plans called for this access tunnel, so urgent was the need to being the depot into operation that a 1.8km long aerial ropeway was constructed. This ropeway carried the ammunition between the sidings and a large loading platform near District 20 of the depot. This allowed the depot to be brought in to use while the tunnel was being constructed.
The tunnel was designed to handle 1000 tons of ammunition wach day, it provide a secure route for the ammunition in to the site and it was practically invisible from the air. A 30 foot deep slopeshaft was sunk at the sidings which became the start of the tunnel which connected at quarry floor level in the depot on one of the main haulage ways. The tunnel is at a constant gradient as it travels up the hill to the depot.
Half of the tunnel was bored nearer the top of the hill where it met a depth of roughly 180 feet below ground, half way down the technique was changed and a trench was opened in to this square box sections of tunnel were laid and re-covered. Most of this section of the tunnel was barely underground, some of it was even partially above the surface level and had to be disguised by forming gently sloping mounds of earth over it.
A conveyor belt was installed in the tunnel which could transport the ammunition at 250 feet per minute, at the siding’s end of the tunnel was an underground marshaling yard where the ammunition would be loaded on to narrow gauge carts and then taking up the slopeshaft to the platform aided by a mechanical tram creeper. The ammunition could then be moved from the carts in to railways carriages for distribution.
The aerial ropeway to the depot continued to be maintained after the tunnel came in to action. This was in case the tunnel’s conveyors ever broke down and a backup was needed. Approaching D-day with high flows of ammunition the tunnel and the rope way was used to handle the massive amounts of ammunition required for the invasion of Europe.

A one hour long walk along Farleigh Down Tunnel towards the former Monkton Farleigh ammunition store.

The Tunnel Served Monkton Farleigh Mine