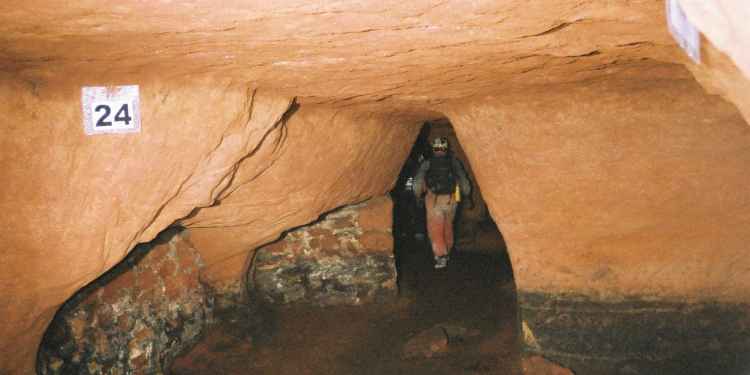 A complex of man made caves under Bristol carved out of red sandstone. The caves are open to the public for one or two weekends a year, more details can be found on the Axbridge Caving Club website.

There is no access to the caves but they are usually open to the public once a year during the Bristol Harbour Festival.

As the series of tunnels and caverns underneath Redcliffe are man made they are in fact a quarry not a cave. They were dug in to the red sand stone under the city, evidence of this can be seen around the cave by the pick marks in the ceiling and walls. There are no natural caves in this area.
The red ochre stone had many uses including producing a cheap dark green glass for bottles and a glaze which could be used in pottery, the caves are still owned today by a glass works.
The caves have a varied history, parts were used a sewerage systems, to hold French prisoners and of course because the caves are waterside there are stories of smugglers hiding out in the caves.
The caves have been split in two by the Redcliffe rail tunnel, the caves are assumed to continue South past the tunnel but the tunnel has blocked access to them completely for ever.