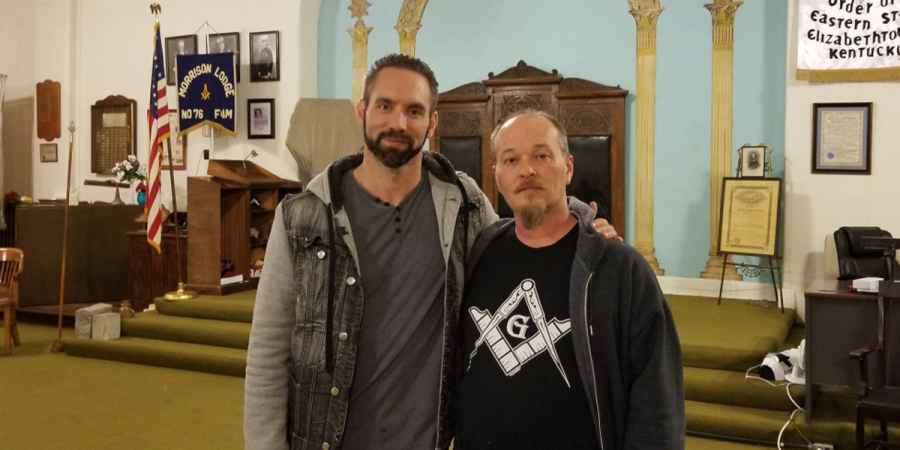 So far in Nick Groff's new ghost hunting series, 'Death Walker', he's been challenging the paranormal status quo and testing theories about hauntings by comparing the paranormal activity at two different locations. So far he's questioned whether renovation work stirs up the spirits in a building, whether the nature of time might be skewing our perception of ghosts, and examined stone tape theory.
In episode four, 'Masonic Mysteries', Nick's mission is a little less clear. The two locations Nick investigates in search of evidence are Octagon Hall in Franklin, Kentucky, and the Morrison Lodge in Elizabethtown Kentucky. Octagon Hall, a former home, is now a museum, but Morrison Lodge is an active Freemasons lodge. Nick tells us, "I've always been fascinated with the teachings and practices of the world's largest secret society known as the Freemasons, despite its longevity Freemasons have long been shrouded in mystery to outside observers."
So, it initially seems like the topic of the episode is going to revolve around the Masons, since Nick will be able to compare paranormal activity at two locations, one which has Masonic links and one that doesn't - perfect for comparison purposes. However, this doesn't seem to be the case, Nick suddenly switches topic and says, "I found that there's a significant convergence of several major ley lines that criss-cross around the globe with ancient monuments and natural landforms and carry along with them streams of supernatural energy, it's this energy theories argue that cause a rise in paranormal activity."
So, it seems Nick is actually investigating how ley lines relate to haunted locations. Nick says that both Octagon Hall and the Morrison Lodge lie within this band of activity. This seems like an odd way to start. Surely if you want to compare evidence from two locations to determine whether ley lines have an impact it would be better to pick two similar haunted locations, one which is on a ley line and one which isn't.
This ley line, the 37th Parallel, is known to some as America's UFO Highway or, Nick says, the "paranormal highway". The line is said to be littered with cases of UFO sightings, cattle mutilations and ancient sacred sites.
At the start of the episode Nick says, "what is it about these two buildings that seems to bring about so much energy? Energy I find that is different to the other locations I've been to." In fact, this point seemed to be so important that Nick said it twice.
He continues, "because of the kind of hauntings at these two locations, it's almost as if the paranormal is amplified in some way along these ley lines." So, it sounds like no comparison is necessary as Nick is already convinced that the ley line is amplifying the activity at the two locations that fall within its energetic band. 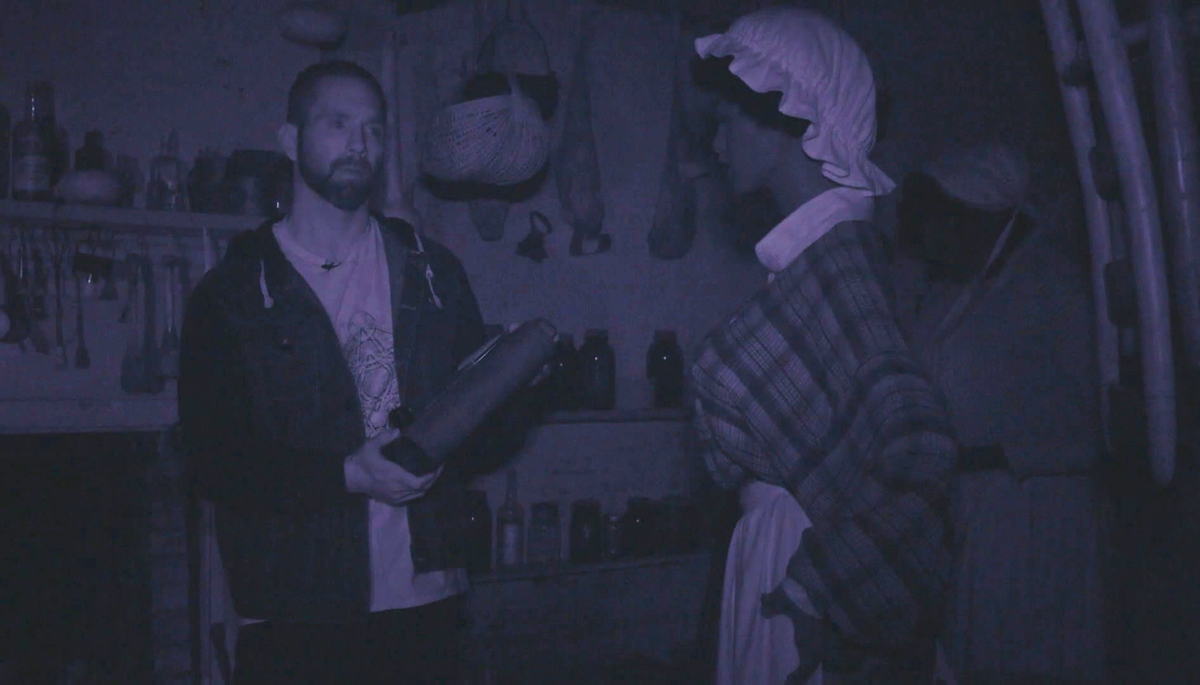 Nick starts by asking "Bear," the manager of Octagon Hall Museum, the all important question, "how did this property be the focal point of this building?" Amazingly, Bear seems to understand the question and tells Nick that it "started in 1847" and that it was originally home to Andrew Jackson Caldwell.
The eight-sided house was once used as a hospital for both Confederate and Union soldiers during the American Civil War. Bear said, "you know they had major surgeries, and everything else, a lot of men made it here, didn't make it out." But it's not just the ghosts of soldiers, Bear says, "I mean, you're gonna have UFOs. You're going to have strange creature activity. Bigfoot has been seen on the property."
Nick calls the location a "melting pot of tragedy," and upon entering for his night investigation straight away said he heard footsteps. He said "I feel like I have goosebumps jolting through my body". Later in the investigation Nick heard the mysterious sound of music playing, unfortunately this wasn't caught on camera.
Nick also had several voices come through a ghost hunting device called a GeoPort. The device monitors vibrations, radio waves and electromagnetic frequencies. It's thought that spirits can manipulate or use the device's sensors to relay intelligent responses in the form of words or phrases. Nick considered some of the responses he heard to be good examples of this. 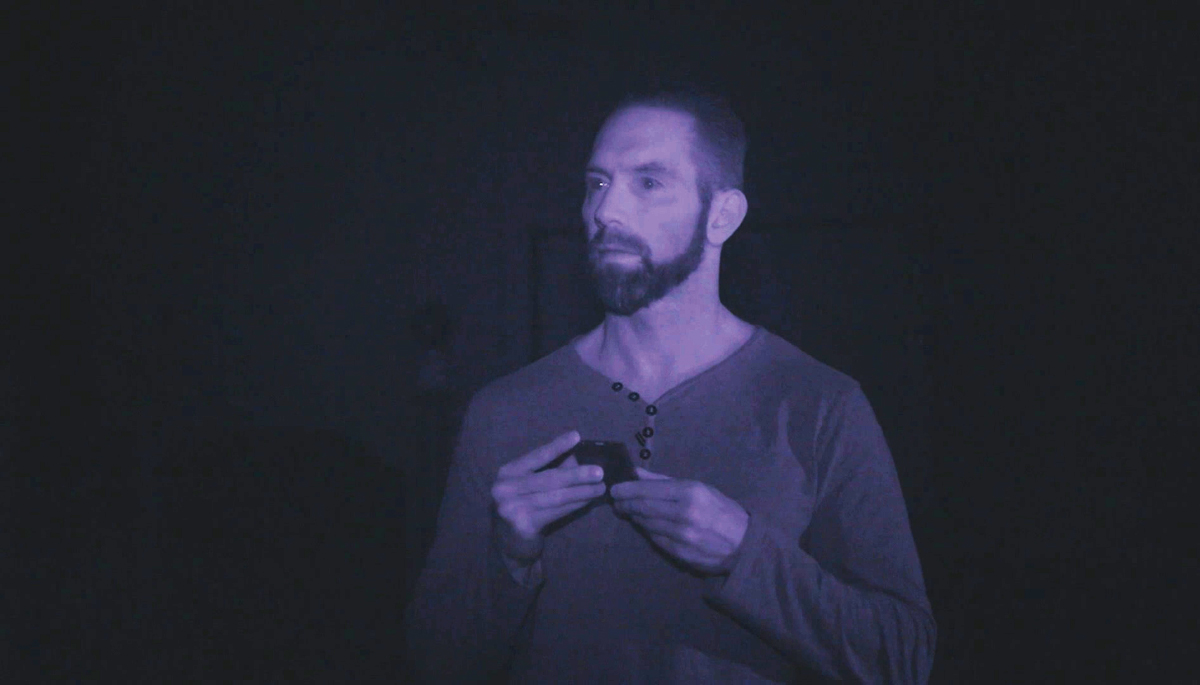 Morrison Lodge is an interesting location that dates back to 1823, when it was originally chartered by the Grand Lodge of New Kentucky. In the past the ground floor has been leased out as a girls' school and orphanage, as well as several other uses, but upstairs has always been used by the Freemasons.
However, the building was burnt down in the early-1900s and was re-built on the same site, because of this Nick says, "I don't think it's the building itself that's haunted, but something about the land." He doesn't explain why. With over a hundred years of history and multiple uses since the building was re-built in 1913 surely it still has the potential of being haunted.
During his night investigation Nick used a device which looked like it was built in the shell of an old Panasonic RR-DR60, but it was actually a device created by John Mallory called a Pana Box and is similar to a spirit box. It's based on a small radio that John took and converted into his own very rare device that scans AM radio frequencies. The idea is that spirits manipulate the static and white noise as it scans to form words and sentences.

Nick summed up the two investigations by saying, "there is so much mystery surrounding these two locations and I don't think it's something we will figure any time soon, let alone one night. The geographical connection fascinates me and at the very least I can leave the Octagon Hall and Morrison Lodge with a new perspective."
Since it wasn't really clear what Nick had set out to prove or disprove in this episode, it's impossible to form any kind of a conclusion. The episode contained two strong investigations and if they were part of any normal ghost hunting series would be deemed a success, but since the premise of this series is two challenge paranormal theories by comparing evidence at two locations, unfortunately the episode fails to achieve what it set out to do.
Both Morrison Lodge and Octagon Hall were similar buildings, they were built around the same time and had similar uses, both being used at one point as a hospital for soldiers. This would be a great starting point if you wanted to compare paranormal activity relating to secret societies since one property has Masonic links and the other doesn't. But using two similar buildings that are both on a ley line doesn't give you anything to compare.
'Death Walker With Nick Groff' continues tomorrow night on the Really channel as part of the channel's Ghostober programming event. Episodes are also available to stream on demand on Discovery+. You can watch Really on Freeview (17), Sky (142), Virgin Media (129) and Freesat (160), plus YouView, BT TV and TalkTalk TV.