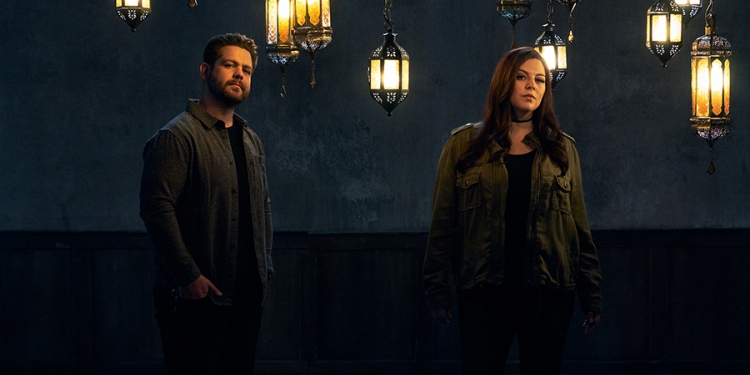 The UK's Really channel, home of all things paranormal, have announced that Jack Osbourne and Katrina Weidman will return for a second season of their ghost hunting television show. 'Portals To Hell' will air as part of the channel's weekly #Freakend schedule starting May 14th.
The show started in the US last month, but now British viewers will get the chance to see Jack and Katrina resume their chilling journey to historically haunted locations in the United States, confronting sinister stories of the supernatural as they seek concrete evidence that a spirit world exists.
The second season of the show premieres at 9pm on Thursday 14th May, as the duo travel to Tennessee to investigate a once-thriving natural springs resort, the Thomas House Hotel. It is rumoured that a dark force has checked into this old hotel.
In the US, the season kicked-off with a two hour special inside Ohio's haunted Old Paulding Jail. Sadly, here in the UK the Really channel are jumping straight in with episode two, and it's not known if the special will air as part of their #Freakend nights of spooky entertainment.
Viewers will now get a double bill of Katrina Weidman on a Thursday night. 'Portals To Hell' is followed at 10pm by the US paranormal investigator's previous project, 'Paranormal Lockdown US', in which she investigated the unusual with Nick Groff.

Ahead of the premiere, Katrina said, "this season is intense, Jack and I purposefully explore locations that embody the darker side of the paranormal, as we try to understand why certain places evoke more sinister activity than others. It's exciting to see what new discoveries we can make in the paranormal field. Yet as we explore the unexplained, we can only presume to know what we're working with. At the end of the day we really don't – and that’s the scary part."
The undaunted duo will face their most fearsome cases yet, as they uncover disturbing tales from bygone pasts and unnerving paranormal activity. Jack and Katrina filter through extensive research, utilise advanced scientific equipment and enlist a network of specialists, including psychic mediums, to try and exhume answers behind these terrifying hauntings.
Jack said, "Katrina and I are breaking down walls – literally, we have unprecedented access to a number of locations and are also the first team to ever investigate some of them for TV. They're incredibly active sites for the paranormal, and we're going all in to try and capture substantial evidence."
Later in the season, Jack and Katrina will head to the site of one of the bloodiest massacres in Colonial America at Fort William Henry in New York, and the 130-year-old Croke-Patterson Mansion in Colorado that's said to be plagued with paranormal activity..
The duo will also investigate the century-old Iron Island Museum in New York that's rumour to house two paranormal portals, the Haunted Hill House in Texas that's said to be plagued by demonic activity, and a network of underground tunnels under Portland, Oregon with a sinister history linked to slavery and kidnapping.
Perhaps the strangest location that is billed as being a part of the series is the Ohio State Reformatory in Mansfield. The episode's write up tells viewers that the "deadly prison" is best known for its role in the movie, 'The Shawshank Redemption'. Since this movie is entirely fictional, the relevance of this statement remains to be seen.
Following the season premiere, eight additional hour-long episodes will kick off the #Freakend, which brings fans of the paranormal two nights of ghostly entertainment every Thursday and Friday night from 9pm. The show is followed at 10pm by 'Paranormal Lockdown US'.
The network's ghostly offering continues from 9pm on Friday night with 'Ghost Adventures: Serial Killer Spirits', and at 10pm repeats of Zak Bagans' 'Deadly Possessions'.
You can watch all these shows on Really on your television in the United Kingdom and Ireland on Freeview (17), Sky (142), Virgin Media (129) and Freesat (160), plus YouView, BT TV and TalkTalk TV. Or watch previous episodes of #Freakend shows on demand on dplay.
For the latest news on 'Portals To Hell', and for games, quizzes and reviews, check out our 'Portals To Hell' episode guide.