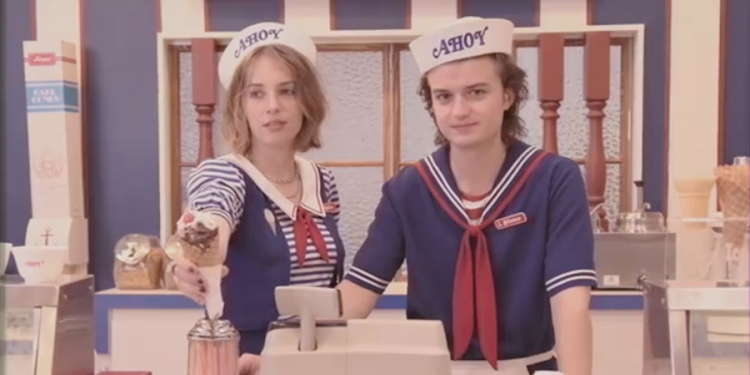 Netflix has released a summer treat for all Stranger Things fans with a surprise release of a rather unusual teaser trailer.
The trailer takes the form of an 80s tv advert for the Starcourt Mall, a new indoor shopping mall opening in Hawkins, the fictional town where Stranger Things is set.
Like a mini episode of Stranger Things itself, there's a swathe of 80s references to pick up on – if nothing else, the 80s fashions on display are incredible.
The best bit? One of the featured shops in the advert is the 'Scoops Ahoy Ice Cream Shop'. But who is this? Wearing a dainty sailors outfit and serving ice cream treats to the hot and bothered citizens of Hawkins? Why, it's young Steve Harrington!

What does the trailer tell us about the series?
At the end of season two, we'd seen the Hawkins National Laboratory closed down, we'd imagine for reasons related to the fact most of the staff were killed by escape demo-dogs and there was a portal to another world. Health and safety nightmare! To be fair, the lab had been a major location and plot feature for the first two seasons. It's a wise move to take the action elsewhere.
The producers of the show, The Duffer Brothers, had already revealed the show would be set during the summer, so in the words of Alice Cooper, school was going to be out for summer.
We also know that season three will include the character of Mayor Kline, to be played by Princess Bride star Cary Elwes. He's been described as 'slick and sleazy' – so perhaps some of his sleaziness will involve deals with the owners of the mall, Starcourt Industries?
So a mall makes a great location to set a whole bunch of action in season three. Face it, if you wanted to film scenes of alien entities from another world coming through to our dimension, the mall gives you so many opportunities to film a classic 80s fight; people running around, leaping between floors, hiding in shops, getting on the roof, falling into fountains, eating obscenely sized snack foods. We can't wait!
Does the trailer hint at a release date for Stranger Things Season 3?
Is there perhaps a hint at when we can expect Stranger Things to return to our Netflix screens? The advert states the mall is 'coming next summer'. It was already known that season three wouldn't be back this summer, or even in time for Halloween. So is it possible it will drop in summer 2019?

A Potted History Of Malls In US Films

Malls regularly pop up in American films, and we can think of a few examples that have particular relevance for Stranger Things.
Weird Science - This film uses the mall to squeeze down the experience of society as a whole, like being in a prison or a school. The two nerds who create a perfect woman get picked on in the mall, having their new stylish fashions and haircuts ruined by the school bullies, led by Robert Downey Jr, who tips a load of slush over them. The bullies are then shocked to find that the nerds are actually heavily involved with the stunning Kelly LeBrock. What then follows is a dramatic switcheroo as the bullies humiliate themselves in futile attempts to get closer to her.
Dawn of the Dead - This 1978 zombie film was mainly set in a mall. Survivors from a zombie apocalypse barricade themselves into a shopping mall to protect themselves. The survivors enjoy easy access to all the goods and food in the shops, which, alongside footage of the undead dragging themselves round the shops means many people see this film primarily as a satire on consumerism.
Clueless - This 1995 film was based around the lives of rich and Beverley Hills high school pupils and how they navigate their way through those tricky teenage years. Whilst the millionaires of Beverley Hills may be light years from rural old Hawkins, Indiana, we know season three of Stranger Things is going to be dealing with some of those trickier issues of teenage life as the cast, and the characters they play, mature.
Commando - This Arnold Schwarzenegger action film from 1985 gets a special mention for setting  a pivotal scene in a classic 80s mall. Garish colours, glass and steel lifts and useless security guards help round out an almost pantomime-like scene where Arnie gets chased and shoot at by entire armies of people yet somehow makes it through.