This article is more than ten years old and was last updated in July 2020. 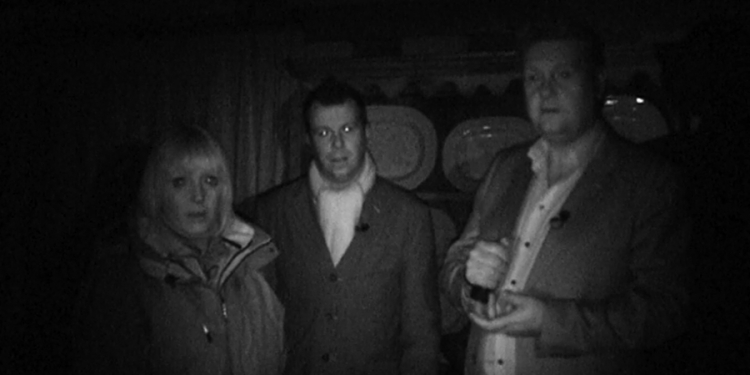 Linking historical fact with paranormal investigation, Yvette Fielding and the Most Haunted set out to uncover the truth behind an ancient murderer mystery in Nantwich, a floral market town in the heart of Cheshire.
Nantwich is a bustling, picturesque hive of Tudor timber-framed houses, nestling beside the peaceful waters of the River Weaver on the Cheshire Plain. However, beneath the quiet facade of this town lie two seemingly mysterious murders and the show's resident historian, Lesley Smith, has sent Yvette out into the town to find out more.
Yvette is joined by medium David Wells and parapsychologist Ciarán O'Keeffe. Their first stop is the Hack Green Nuclear Bunker on the outskirts of the town. Once a bastion of the Cold War, it is now a popular museum. It is built on site of a famous Civil War battle, and it's for the reason that Lesley hopes that David might pick up the spirit of a soldier.
David did pick up on the essence of a soldier who was staggering across the former battleground and David gets the impression that he was murdered, rather than dying in battle.
Having picked up on the name Ralph, David wanted to try to pin down the fate of this Civil War cavalier and thought an overview of Nantwich might help. He and the team ascended the spiralling stone stairs of the tower of St. Mary's church for a bird's eye view of the town. From here David was able to tell that Ralph died at the hand of a woman and suspect it might have been poisoning. He felt the crime was conducted in an old Tudor-style manor house.
In attempt to advance their investigation, Lesley suggests they move into the heart of town in search of more psychic clues. He picked up on an unrelated murder, involving to female friends, one of which was murdered by a man she shunned. This David realised that Lesley sending them to the high street had been a red herring and they were soon back on the trail of Ralph.
In an alleyway on the other side of the town, David once again picked up on the spirit of Ralph, who he saw in an aroused and drunken state on his way to meet a mistress.
Lesley then sent the team to a Tudor mansion that matched the description of the one David had given earlier. She sent Yvette, David and Ciarán to the beautiful Churche's Mansion, a very famous timbered-framed house right in the middle of Nantwich.
At the mansion David was able to pick up on the final details of the soldier's murder. He said that he felt that the woman, named Anne, poisoned Ralph using arsenic in wine. She killed him in panic as she feared that her husband might find out about her affair.
Later in the episode, the team were joined by Karl Beattie, Iain Cash, Stuart Torevell and Cath Howe who carried out a paranormal investigation in an attempt to contact the spirit of Ralph or Anne. During a séance, they used table tipping to confirm the details that David had picked up on.
Once the team were satisfied with the contact they made, their investigation came to an end, a journey which took them through time from a Cold War bunker to a picturesque Tudor house. This house was the scene of the murder of a Civil War cavalier. His murder seems to have stemmed from a story as old as time, the classic love triangle. She was married but desperate with fear that her wealth husband would discover her clandestine liaison and disowner her. So, she poisons Ralph, her lover, in order to keep her affair a secret.
Hack Green Nuclear Bunker
St. Mary's Church
Churche's Mansion