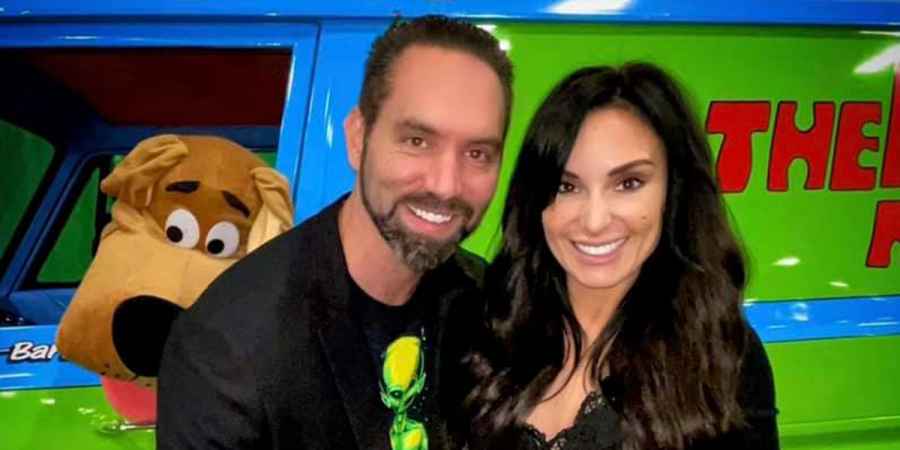 Photo: facebook.com
US ghost hunter, Nick Groff, star of 'Paranormal Lockdown' and more recently 'Death Walker' has announced that he and his wife are expecting their first child together.
The 41-years-old, who is more often seen on screen with his co-host Katrina Weidman, broke the news that he and Tessa DelZoppo's have a baby boy on the way.
The baby will be Nick's first child with Tessa, a psychic medium and actress, who he married at the Salem Witch Board Museum in Massachusetts last week.
The happy couple shared a photo along with the news of the new arrival on social media. Nick wrote, "so excited to announce Tessa DelZoppo and I are having a baby boy!!" The post also revealed that 'baby boy Groff' is due in April of next year. Baby boy Groff will be the little brother to Annabelle and Chloë, Nick's two daughters from his previous marriage.
It's been a busy year for the California-born ghost hunter, not only has he found time to get married and bring a new life into the world, earlier this year Nick set out to challenge the paranormal status quo in his own investigative series, 'Death Walker', which saw him delve headfirst into some of the most bizarre and controversial theories relating to hauntings.
'Death Walker' originally premiered online for American fans over Halloween 2020 on the streaming service VIDI.Space, which launched in 2018 but has since been acquired by the startup, QOSM due to its fast growth within the paranormal and horror genres.
This left the series homeless before it had reached viewers outside of the United States. That is until Discovery snapped it up for subscribers of their streaming platform in the UK.
'Death Walker' has been available to watch for British subscribers of Discovery+ for some time, but over Halloween 2021 the series got its global television debut on the British free-to-air channel Really.
Nick is perhaps best-known as an original member of the 'Ghost Adventures' team and his more recent series alongside Katrina , 'Paranormal Lockdown'. The series, which saw the pair locked down for 72 straight hours in some of the most haunted locations around the world, came to an end in 2019. Katrina has since gone on to work with Jack Osbourne in 'Portals To Hell'.
Nick developed an interest in the paranormal after having a near-death experience which lead to a ghostly encounter. Talking about his passion for the subject, Nick said, "I love theories, I love out of the box thinking and we all don't have the right answer about life death and the journey."
This is what has lead Nick to question why spirits seem to be compelled to remain tethered to some of the world's most grim locations in 'Death Walker'. These places are often where people were harshly treated during their lives. To find the answers, Nick heads to a selection of allegedly haunted locations that he's never investigated before, including prisons, funeral homes and historic houses.
Last week Nick shared photos of what he described as "the most incredible day." He wrote, "❤️ We're married!! 🔥", tagging his bride, Tessa in the post. He added, "Im beyond happy and honored to call you my wife! So much love!!!"
Massive congratulations to Tessa and Nick!

More On Nick Groff View All