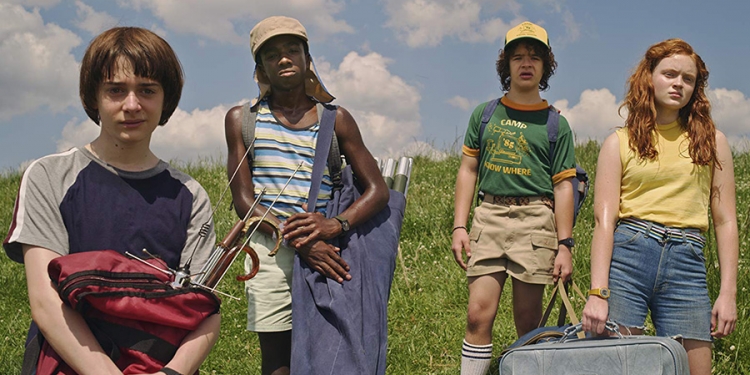 It's strange to remember that only three years ago the first season of Stranger Things appeared as if by magic on millions of Netflix accounts around the world. The series went from pretty much unknown to global phenomenon apparently overnight. Anticipation for Stranger Things season 3 is so great that the date it kicks off, July 4th – American Independence Day - has been burnt into the cerebral cortex of all of us waiting for our next trip to Hawkins.
While you're still waiting, what can you do to prepare for the return of Stranger Things? Our key piece of advice is to re-watch seasons 1 & 2. If you haven't done it recently, Stranger Things is a series that really does benefit from repeat viewings. There is so much going on in each season it's easy to miss out on things first time round, from looks characters exchange with each other to jokes that went over your head. Taking a second look can really make some of the larger themes and homages to other films really pop out.

Time is running out before season 3 starts, but you've still got plenty of time to get through the eight episodes of season 1, plus nine episodes in season 2. With each episode clocking in at just under 60 minutes you've got to find approximately 17 hours between now and July 4th, not including snack breaks, toilet breaks, or trekking to your front door to pick up the takeaway you ordered.

Hang on, 17 episodes to get through? Why not get some Stranger Things loving friends round and make a party of it. Start watching at 9am, keep watching non-stop and you'll finish around 2am the next morning. Please remember to take regular breaks though!

Go Behind The Scenes

By the time season 2 of Stranger Things came around, we were spoilt with Beyond Stranger Things, a neat little after show series that acts as an episode guide to the second season. Featuring the key writers and producers of the show, The Duffer Brothers, plus key cast members, it's a light-hearted, fun show, but you learn an awful lot about how they write and film each episode, their approach to developing the characters and what it's like to actually film the show, aided by a motley bunch of outtakes.
We recommend viewing each episode of the show, followed by the corresponding episode of Beyond Stranger Things. It helps you deepen your understanding of the show and provides a nice palate cleanser between Stranger Things courses!

Listen To The Soundtrack

Stranger Things: Halloween Sounds From the Upside Down

Take your mind back to Hawkins by listening to the soundtracks.

Stream it on Spotify, go 80s retro with the CD, or for the full on nostalgia-freaks why not buy the soundtracks on vinyl? They come with beautiful artwork, and in addition to the Season 1 and 2 soundtrack albums, there's even a 'Halloween Sounds From The Underground' album of eerie tracks, which is available pumpkin-coloured orange vinyl.

Brush Up On Your 80s Films

How about helping to get yourself in the mood by reminding yourself of some of the classic films from the Stranger Things period. And if you're too young to remember them first time round, you could be in for a treat.
We know the new series is set in the summer of 1985. Some of the biggest films that year included Back to the Future, Rambo: First Blood Part II, Rocky IV, Cocoon and The Goonies  - all of which we reckon stand a decent chance of being referenced in the new series.
The clock is ticking, so start your catch-up viewing soon. We'll see you on the 4th July with our episodes guides and more for Season 3 of Stranger Things.