David Harbour who plays Jim Hopper in Netflix's 'Stranger Things' says that the upcoming fourth season of the show is his favourite due to his character's development. 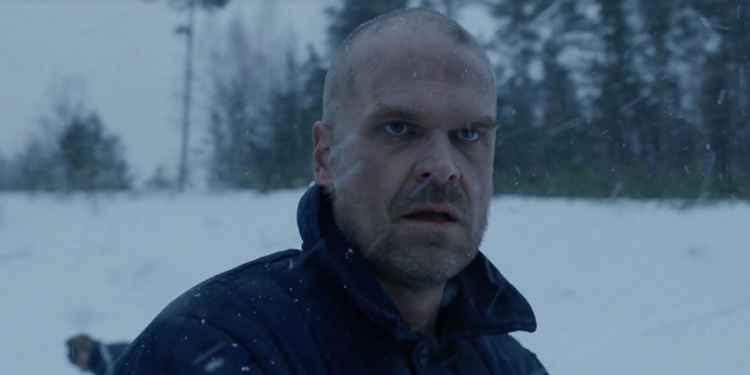 Photo: © Netflix
The fourth season of 'Stranger Things' was originally due to drop on Netflix this year, but the release was pushed back due to the global COVID-19 crisis, which temporarily halted production of the show.
Although we don't yet know a new release date for the next season, we do know that at least one of its stars think it is the best season yet.
David Harbour who plays Hopper in the supernatural series spoke to People about the upcoming series and what it has in store for his character, the chief of police in Hawkins, Indiana.
We know the show's creators, the Duffer brothers, are heavily influenced by 1980s pop culture, but according to David they are also " very responsive to the fan response," he says they are always "a step ahead with the script."
The fate of Jim Hopper seemed uncertain after the third season in which we saw him seemingly killed in a secret Russians bunker under Starcourt Mall, but a teaser trailer for the upcoming fourth series revealed that things might not have been what they seemed.
The clip showed Hopper very much alive but being held as a prisoner by the Russian military where he was being forced to carry out hard labour. Watched on by armed guards, we see Hopper and several other men working to lay a railway track through the snow-covered landscape.

David told People what we can expect from season four, " a lot of your favourite characters doing the thing that you love them for ...but you'll also see them twist it and turn it into other colours and other flavours."
He added, "one of the great things that you can see with Hopper is that he was a protector, he’s a man of justice. He now has become a prisoner. He's trapped and he's isolated. And we get to see an entirely other colour of him that has been hinted at."
David summed up by saying, "this season is my favourite because he really is going to show you some new colours and what he’s really made up of."
We don't actually know much about the new season yet, although it was recently announced that Freddie Krueger actor, Robert Englund, will be one of a handful of actors joining the show's cast as a recurring new character. Robert will take on the role of Victor Creel, a disturbed killer who's locked up in a psychiatric hospital.
Robert will be joined by actor Jamie Campbell Bower, who will portray a carer working at the psychiatric hospital. Other new regulars include Joseph Quinn, Sherman Augustus, Mason Dye, Nikola Djuricko, and Tom Wlaschiha.
The last season wrapped up the story with the gang going their own separate ways, so we were left wondering where the fourth instalment would take place and which of the cast would return.
An earlier trailer for the fourth season included the strap line "we're not in Hawkins anymore." This 'Wizard Of Oz' reference implies that 'Stranger Things' is making the expected move to setting the next season outside of Hawkins.
However we do now know thanks to a photo from the shoot that the new season will be set in 1986. This is given away by two movie posters visible in the background, including one for Michael J. Fox's 1986 film, 'Teen Wolf'.
A teaser video released in March also gave us a few clues about which cast members are involved in season four. The video shows a sneak peak at one of the show's early script read-throughs in Atlanta.
The clip showed a few familiar faces including the gang itself, Millie Bobby Brown (Eleven), Finn Wolfhard (Mike), Gaten Matarezzo (Dustin), Caleb McLaughlin (Lucas), Sadie Sink (Max) and Noah Schnapp (Will).
The clip also confirmed the return of Winona Ryder as Joyce, and David Harbour as Hopper. An earlier teaser trailer revealed the return of Hopper, despite his apparent demise at the end of season three.
Charlie Heaton also returns as Jonathan, alongside Natalie Dyer (Nancy) and Brett Gelman who you'll remember as arch conspiracy theorist, who it turns out, might have been right all along, Murray. Priah Ferguson returns, she was one of the breakout stars in season three as playing Lucas' younger sister Erica. Plus Cara Buono as Karen Wheeler and Joe Keery as Steve Harrington.
Jonathan has a new friend in the upcoming season, a fun-loving stoner played by Eduardo Franco who delivers for Surfer Boy Pizzas. A delicious fresh pizza, would go down well with an ice cream from Scoops Ahoy.