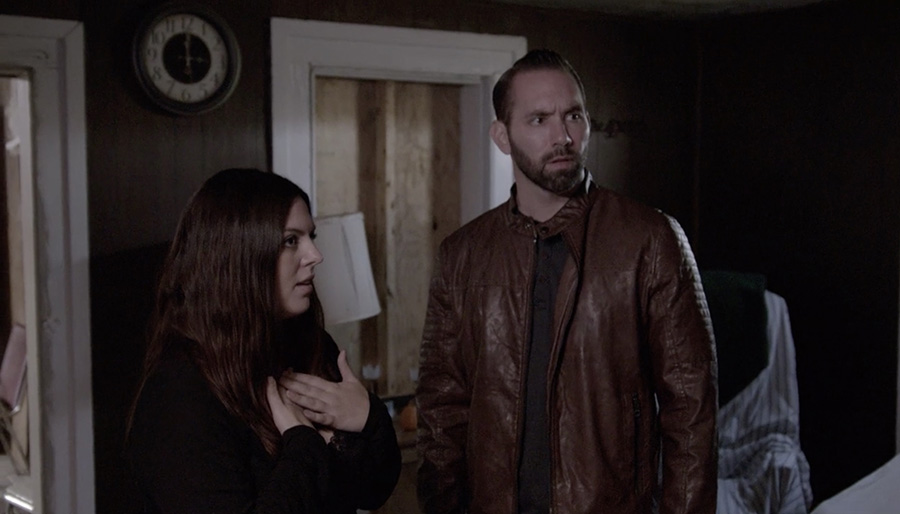 Having recently repeated the entire series of 'Paranormal Lockdown UK', the Really channel are now giving viewers another chance to watch the original series that started it all.
Here in the UK, the series is being billed as 'Paranormal Lockdown US', and although the show is new to Really, it actually pre-dates the recent UK series and has previously been shown on Quest Red in the UK. Really picked up the series five episodes in with Nick Groff and Katrina Weidman's 72-hour lockdown inside of Hinsdale House which stands in a rural community in Northwestern New York, hidden in the Adirondack Mountains.
The rundown and unassuming house at the centre of the investigation is said to be haunted by the ghost of a man murdered by his own brother, a boy killed in a buzzsaw accident, and a woman said to have been hanged from a tree.
As Nick and Katrina walk into the house, their lockdown clock starts and for the next 72 hours the two paranormal investigators will be confined to the haunted property, which is said to be uninhabitable due to supernatural activity. There has even been unsuccessful exorcisms of the house. The property was saved from demolition by a new owner who began to invite investigators in to study its paranormal claims.
Nick said, "I feel drawn to this location. I've been having these weird dreams. I would see this girl appear to me. It's almost like she's warning me about this location." Katrina said, "whenever I go into a place that's had that much activity, something that stays in my head the entire time is 'what doors are you opening? And can you ever really close them?'"
Before the investigation even got underway, Nick said there "are warning signs of a demonic presence looking to manipulate our minds, and possess our souls." 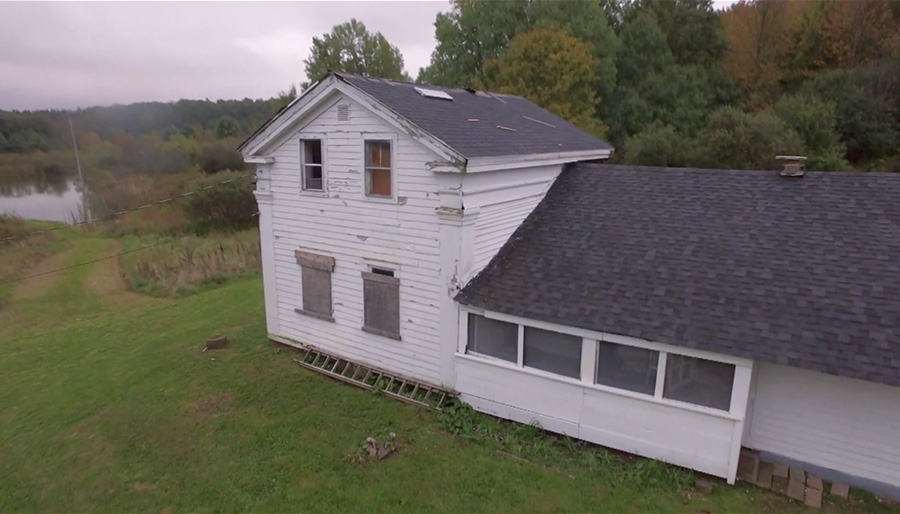 After a quick EVP session with a Panasonic RR-DR60 audio recorder in which Nick thought he captured what sounded like a female voice in his recordings, the duo meet Tony Spera, a religious demonologist and the son-in-law of famous demonologists Ed and Lorraine Warren, who investigated this home in the 1970s. Katrina asks Tony how he feels inside the house, the demonic expert said "I feel heaviness in my head. A lot of times when I go into a haunting, I don't feel that, if it's a human spirit." 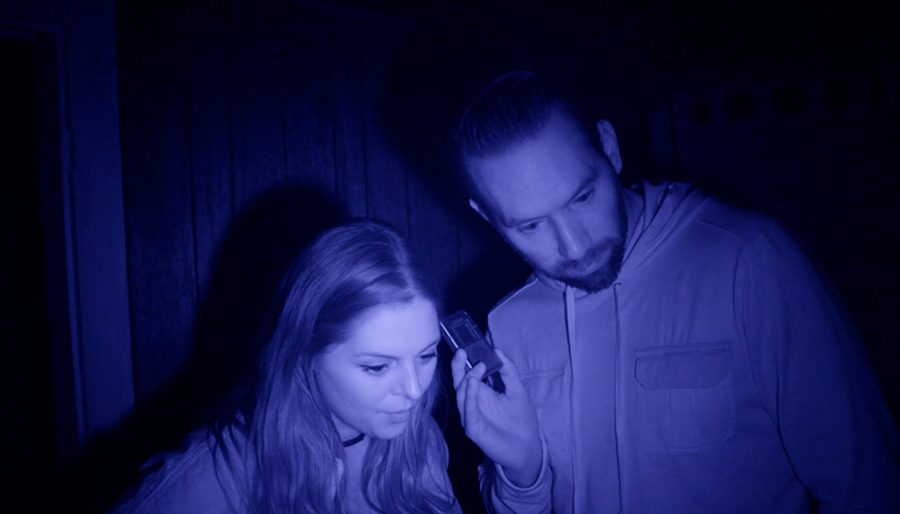 As night falls, Nick and Katrina are left alone in the house with just their camera man as they begin their investigation in the basement. Katrina braved the dark and eerie space on her own, and within a few seconds reported hearing disembodied breathing coming from behind her.
Moments later they were upstairs near Mary's room, which is said to be the most sinister part of the house. Once again using his EVP recorder, Nick attempted to capture spirits' voices. The pair agreed that the scratchy sounds caught on the devices was unmistakably a female voice, which Nick thought was calling him by name.
While Katrina beds down for the night downstairs, Nick braves Mary's room... almost, choosing to sleep outside the room rather than inside.
The next morning the paranormal investigators ventured out into the forest around the property in search of a tree that might have been old enough to be the site where the unnamed woman is said to have hanged herself. Finding a suitably old tree, Nick once again pulled out his EVP record and again said he could a female voice responding as they called out at the base of the tree. 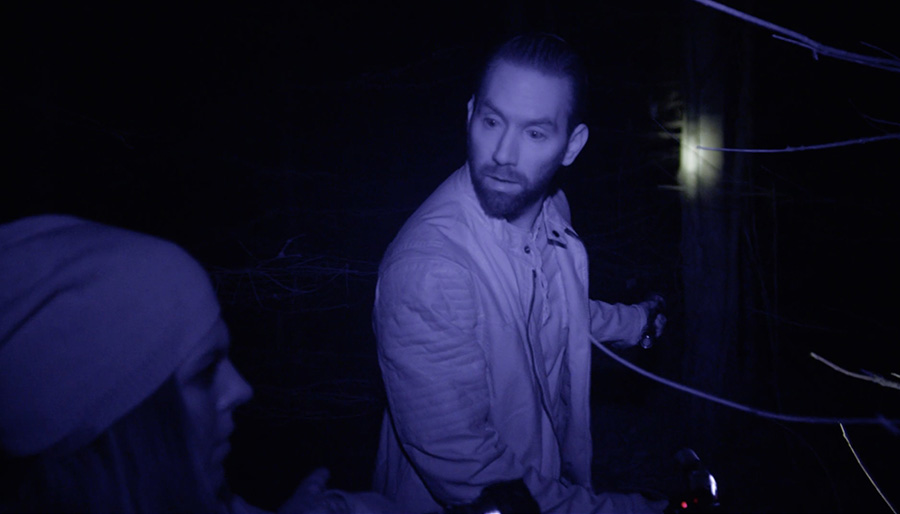 Based on the success of the EVP experiment, on the second night the duo started their investigation in the forest, which were of course much scarier at night. While outside, Nick was sure he could hear chanting, and moments later the sound of someone running. Although Katrina couldn't hear it.
Before long the team were forced back inside by the ominous sound of coyotes getting closer. And surprisingly, that seemed to be it for night two. We next see the investigators in the morning, and Nick returns to the woods to continue where they left off the previous night, but again discovers very little other than an area of the forest where the trees appeared to be dead.
For the final night Nick and Katrina split up. Nick stays alone in the house where he hears a loud bang that shook the entire house. He describes feeling a burst of energy rush into Mary's room with him and pushing him to the bed, but as he moved away he said he felt a sensation like something trying to pull him back. He continued to be haunted by knocking sounds, which all came in threes - a demonic trait.
Nick then captures another EVP in the bedroom, this time he believes the voice is saying "there's no heaven," which seems to be in direct response to Nick's question "what happens when we die?"
Meanwhile Katrina was out in the forest alone, where she became unnerved after hearing footsteps walking towards her. She said, "I keep hearing noises out here and it is freaking me out. I feel like I'm not supposed to be here." After a while Katrina heard Nick scream and returned to the house to check on him.
She found him sat at the bottom of the stairs, but it was never really explained what caused him to scream - presumably the moment wasn't caught on Nick's camera.
Towards the end of the episode, Nick said "after three days of investigating, hardcore, I feel a little broken. I feel mentally out of it." He added that he feels confident and excited about the paranormal activity they captured, which although minimal, was interesting.
'Paranormal Lockdown US' continues next week on Really as part of the channel's #Freakend event, bringing viewers two nights of paranormal entertainment every Thursday and Friday.
You can watch in the United Kingdom and Ireland as part of the Discovery family of channels. You can watch Really on Freeview (17), Sky (142), Virgin Media (129) and Freesat (160), plus YouView, BT TV and TalkTalk TV. Or watch previous episodes on demand on dplay.