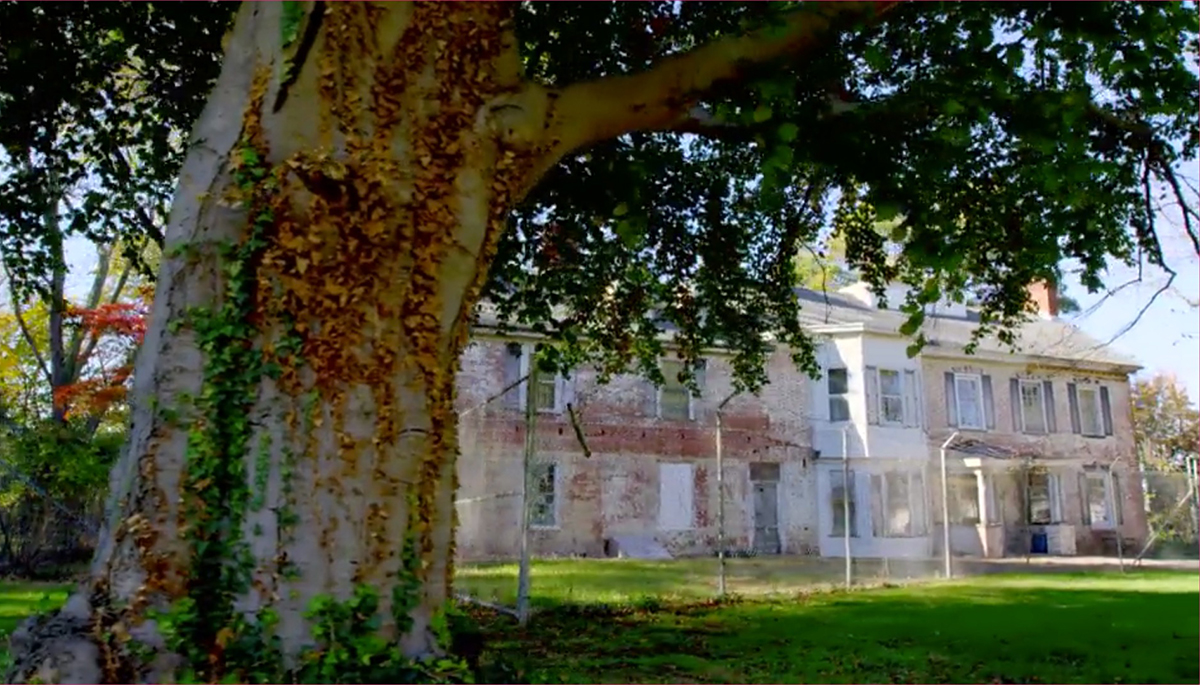 Nick Groff and Katrina Weidman spend 72 hours in White Hill Mansion. While they gather visual evidence of a child spirit in the attic, they question if all the spirits they encounter are that innocent.
Here in the UK, the series is being billed as 'Paranormal Lockdown US', and although the show is new to Really, it actually pre-dates the recent UK series and has previously been shown on Quest Red in the UK. This week Really brings us episode eight of the second season.
The White Hill Mansion has stood in Fieldsboro, New Jersey longer than the US has held its independence. It was built in 1722 by the Field family but was soon marked with tragedy. When Robert Field suddenly drowned, his widow Mary and seven young children were left alone in the house.
By 1776, the property was overrun by both British and continental soldiers and Mary was forced to turn her living room into a hospital for the injured and dying from nearby battlefields. Over the years the building has been through many other uses, including a period as a brothel, housing a restaurant and speakeasy in the basement, and eventually became abandoned.
A quickly moving child-like apparition has been seen dashing around the house and a dark figure has been sighted in the former basement bar. 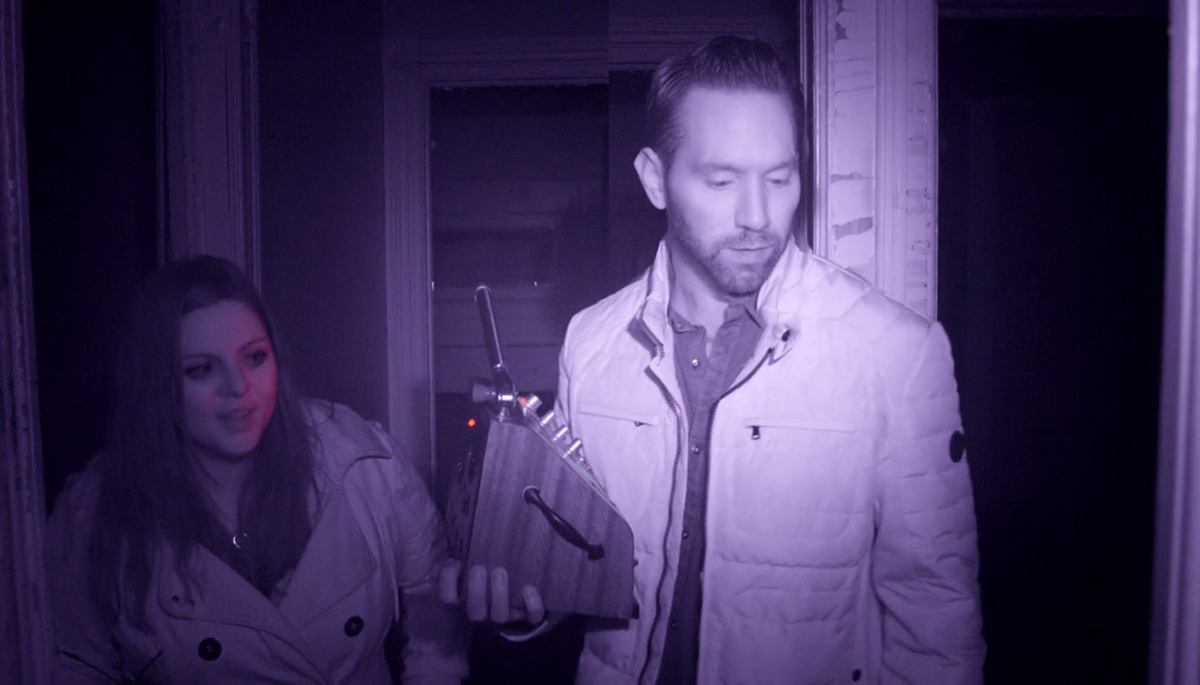 The pair started their investigation in the basement where straightaway Katrina thought she saw a face next to her in the darkness. Nick called out to ask the spirit if that was them and a response came through their ghost hunting gadget called the GeoBox which seem to say "sorry, that was me."
A GeoBox is a device that scans through multiple frequencies of the electromagnetic spectrum, the idea is that intelligent spirits can manipulate or use the ambient EM field to relay intelligent responses in the form of words or sentences.
Moments later Nick heard something coming from the floor above them, so they went to investigate, before moving up to the attic and venturing into a hidden corridor. In this creepy area of forgotten rooms Katrina felt as if something touched her arm.
After a while the duo decided to try to get some sleep. Nick made the terrible decision to sleep in a bath tub. Katrina much more sensibly decided to sleep on a normal bed, but in the creepy attic. While Nick slept a proximity detector near the bathroom door lit up indicating something was near it.
The next morning they continued their investigation using an SLS camera. This special type of camera uses 3D mapping technology to detect human-like shapes in the darkness, it highlights them on its screen in the form of a stick figure - however on this occasion it didn't provide any compelling evidence. 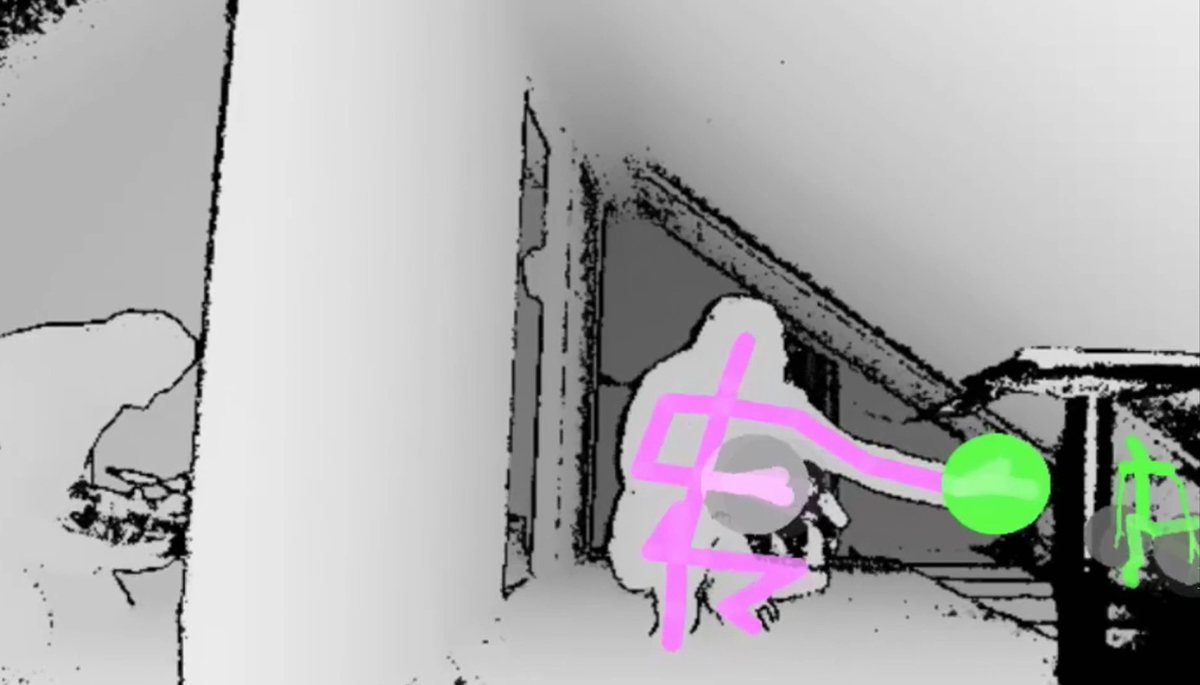 While they were preparing for their second night's investigation, the show's camera man Rob Saffi called Nick and Katrina because the SLS camera had picked up on something in the attic. A glitchy jittering miniature stick figure could be seen on the screen. Nick and Katrina believed this to be the spirit of a child.
Katrina got close to the apparition and was mapped by the camera as a pink stick figure. When she reached out Nick said that the green figure seemed to be touching her hand, although it didn't look like the two stick figures made contact. At the same moment Katrina said her hand felt numb.
Nick then tried to interact with the figure himself, but as his arm passed in front of the figure blocking the camera's view, it forced the camera to re-assess its perspective, which caused the figure to disappear.
The next thing we see is the duo setting up their beds for the night, so presumably day two of the investigation was uneventful other than the SLS activity.
That next night Nick and Katrina used a ghost hunting app called Portal which was connected to a Wonder Box, a device created by Steve Huff of Huff Paranormal. They had several noises come through which sounded like voices, but the were a little unclear and didn't relay any intelligent information.
While they were conducting this experiment, Nick felt as if something touched his hair. Then later as they were moving around, Rob heard what he thought was the sound of a child laughing coming from one of the empty rooms.
Towards the end of the investigation, the pair split up and Katrina thought she heard a door close somewhere in the house.
'Paranormal Lockdown US' takes a break from this week to make room for #13NightsOfFrights, Really's schedule of paranormal programming with airs every night in the run up to Halloween. You can view the full schedule here.
You can watch in the United Kingdom and Ireland as part of the Discovery family of channels. You can watch Really on Freeview (17), Sky (142), Virgin Media (129) and Freesat (160), plus YouView, BT TV and TalkTalk TV. Or watch previous episodes on demand on dplay.