Most Haunted Episodes Filmed In The East Midlands 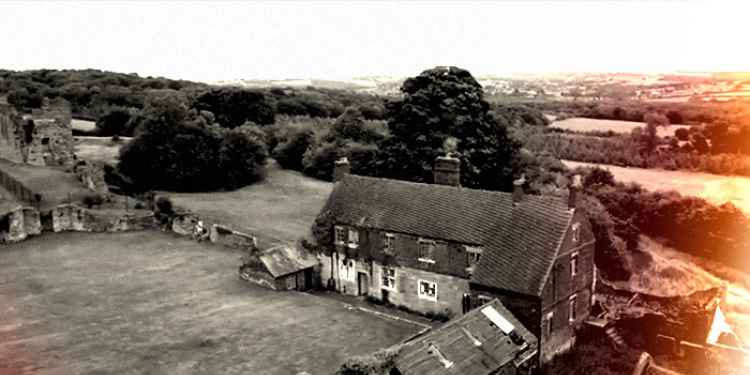 Since Yvette Fielding and her team of ghost hunters first appeared on our televisions in 2002, they've visited hundreds of haunted locations around the country, including a total of 19 episodes filmed in the East Midlands.
The region is the location of one of the show's most talked about investigations to date. The team embarked on an as-live at Codnor Castle Cottage, where a cursed doll spontaneously burst into flames in the house's attic.
The team first visited the area in series one, when they investigated Derby Gaol, a location which is connected with former team member, Richard Felix.
Below is a complete list of every location in the East Midlands that the team have visited.

Most Haunted Locations In The East Midlands

WATCH: Amazon Prime
09 Jul 2002 • Review
Yvette Fielding and a team of experts visit Derby jail, which was built in 1756 and played host to many brutal executions.

WATCH: Amazon Prime • YouTube
13 May 2003 • Review
Yvette Fielding and a team of experts visit Derby, which is reported to be the most haunted city in Europe. They call at the Heritage Centre, Lafferty's Pub and the Bell Inn.

23 Aug 2003 • Review
Comedian Vic Reeves and his wife Nancy Sorrell join the team to investigate Belgrave Hall in Leicestershire. It is no laughing matter though, as during a séance Derek attacks crew-member Stuart Torevell and John Dibley collapses.

WATCH: Amazon Prime • YouTube
07 Oct 2003 • Review
Yvette Fielding and the team visit a supposedly haunted airfield housing the wreckage of two planes which crashed after being shot down during a bombing raid in East Kirkby, Lincolnshire, during the Second World War.

WATCH: Amazon Prime • YouTube
25 May 2004 • Review
Guildhall in Leicester was once a court house, a police headquarters and a school. Loud, inexplicable footsteps are caught on camera and the crew becomes ill while in a cell.

09 Aug 2005
Yvette Fielding and a team of investigators visit Elvaston Castle in Derbyshire to see whether the early-19th-century building still houses any of its former residents.

30 Aug 2005
Yvette Fielding and a team visit Tissington Hall, where their investigation reveals an ancient tragedy that still haunts the rooms of this family home.

WATCH: Amazon Prime
03 Jul 2007 • Review
This quaint, old village is found in the middle of the Peak District, in an area known as the Vale of Hope. But with so many tales of ghostly and paranormal happenings, is it as idyllic as it looks? The team head off to find out.

18 Sep 2014 • Review
Yvette Fielding takes five members of the England Rugby team to a neo-classical, former monastery in Northampton, where they hope to spot the spirit of the Blue Lady.

03 Nov 2017 • Review
Yvette Fielding and Karl Beattie were tormented by an unknown force in a terrifying cellar beneath The Old House in Coalville.

09 Feb 2018 • Review
Yvette Fielding takes her ghost hunting team to a Grade II listed Victorian country house in Leicestershire on the hunt for the ghost of a coachman who stalks the house's guests.

16 Feb 2018 • Review
The Most Haunted team, fronted by Yvette Fielding, embark on the second part of their investigation of an enormous Victorian manor on the edge of the Charnwood Forest in Leicestershire.

09 Mar 2018 • Review • Location Details
The conclusion of Yvette Fielding and the Most Haunted team's two-part investigation at an isolated farmhouse, built on the grounds of Codnor Castle in Derby.

19 Oct 2018 • Review
Yvette Fielding and the team embark on a special, uncut edition of Most Haunted at a former prison, where witnesses have reported seeing dark shadowy figures, hearing unexplained noises and seeing doors slam.

20 Oct 2018 • Review
The second part of Yvette Fielding and the Most Haunted team's investigation of a former prison in Rutland, where dark shadowy figures have been seen and doors slam on their own.

22 Feb 2019 • Review
Yvette Fielding and her team visit Kelham Hall in Nottinghamshire. From the start, activity is prevalent in this historical building, and Glen is faced with something unexplained.

01 Mar 2019 • Review
Yvette continues with her team in a remarkable investigation of Kelham Hall, as they venture out of the cellar and investigate the upper floors.

The Galleries Of Justice, Nottingham

6 Mar 2010 • 1 Night • The Best Of Most Haunted Live: Volume 9
Yvette Fielding and the Most Haunted team spend a night behind bars at Lincoln Prison, a now disused jail, for the penultimate episode of their eight-part live series.
Lincoln Prison, Lincoln