Most Haunted Episodes Filmed In The South West Of England 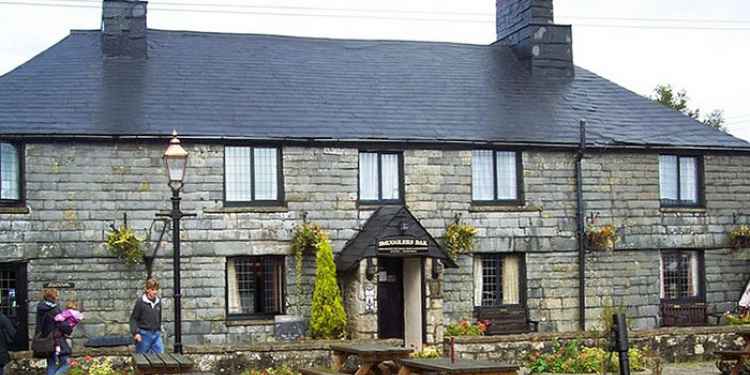 Photo: © Trish Steel
Since Yvette Fielding and her team of ghost hunters first appeared on our televisions in 2002, they've visited hundreds of haunted locations around the country, including a total of 22 episodes filmed in the West Country.
The South West is a hotbed for paranormal activity. It's home to two infamous haunted pubs, the Jamaica Inn and the Ancient Ram Inn. It's said to be haunted by the notorious pirate Blackbeard, and the engineer Isambard Kingdom Brunel.
The team first visited the area in series one, when they investigated the Athelhampton Hall in Dorchester and visited Avebury in Wiltshire, home of an ancient stone circle and the haunted Red Lion Pub.
As well as these 22 episodes, the team also came to the South West for three 'Most Haunted Live!' shows. The first of which was at Woodchester Mansion, Gloucestershire in 2003. In 2005 the team headed to Devon for a three-night long live investigation in Brixham, where they visited Lupton House, The Globe Hotel, Brixham Heritage Museum, The Smugglers' Haunt, and Berry Pomeroy Castle.
And in 2007 the team came to Bristol for a live show where they investigated some of the ghosts associated with the city's history of smugglers and slavery. Over the three nights they visited the Transylvanian Room, Desert Tower, The Hanging Gallery, Guards Passage Way, Old Gate Tower, White Tower, Bethlen Wing, the Painted Tower, New Gate Tower, Torture Tower, and Knights Hall.
The show took a hiatus in 2010, and since its return five years later the team are yet to return to the South West of England. Below is a complete list of every location in the South West that the team have visited.

Most Haunted Locations In The South West

WATCH: Amazon Prime • YouTube
25 May 2002 • Review
Yvette Fielding and a team of experts visit Athelhampton House in Dorset, which is believed to be haunted by a monkey.

WATCH: Amazon Prime • YouTube
25 Jun 2002 • Review
Yvette Fielding and a team of experts visit the Red Lion pub in Avebury, Wiltshire and witness a mysterious flying object in one of the bedrooms.

WATCH: Amazon Prime • YouTube
27 May 2003 • Review
Yvette Fielding, medium Derek Acorah and the experts visit Pengersick Castle in Cornwall, said to be haunted by the ghosts of sailors and monks, in the hope of experiencing something out of the ordinary.

WATCH: Amazon Prime • YouTube
23 Mar 2004 • Review
Yvette Fielding and spirit medium Derek Acorah take a trip to Owlpen Manor in the Cotswolds, where they keep an eye out for a book-throwing poltergeist.

WATCH: Amazon Prime • YouTube
06 Apr 2004 • Review
Yvette Fielding and a team of paranormal investigators visit Jamaica Inn, Cornwall, an 18th-century hostelry thought to be haunted by the ghost of a man in a tricorne hat.

WATCH: Amazon Prime • YouTube
11 May 2004 • Review
Yvette Fielding and a team of experts visit the Wellington Hotel, a 17th-century coaching inn at Boscastle in Cornwall, which is rumoured to be haunted by the ghost of Thomas Hardy.

WATCH: Amazon Prime • YouTube
14 Sep 2004
Yvette Fielding, Derek Acorah and the team spend a night at the Chough Hotel in Somerset, where they discover the secrets of the building's dark past. David Bull holds a vigil alone in the attic - but it is a decision he will come to regret.

WATCH: Amazon Prime • YouTube
28 Sep 2004 • Location Details
Yvette Fielding and spirit medium Derek Acorah travel to the Black Swan Hotel in Devizes, where they are helped by Uri Geller as they uncover a shocking secret.

WATCH: Amazon Prime
23 Nov 2004 • Location Details
The ghost hunters carry out chilling paranormal investigations in Gloucestershire at the Ancient Ram Inn, where apprehension turns to terror as they find evidence of witchcraft.

29 Mar 2005 • Review • Location Details
Yvette Fielding and a team of investigators visit Bodmin Jail in Cornwall in the hope of encountering the ghosts of former prisoners.

10 May 2005
This Elizabethan country house near Padstow, Cornwall has been in the hands of a single family for more than 400 years. A ghostly boy is said to dash around the kitchens, a sewing lady and The Green Lady also haunt the house.

24 May 2005
The team explore the dark and sinister side of the historic Petty France manor house.

WATCH: Amazon Prime • YouTube
15 Nov 2005 • Location Details
Yvette Fielding and the team visit Woodchester, a 19th-century mansion that was only semi-finished in 1866. This is a house that has never truly been a home. The ghostly figures of a man, a woman sobbing with grief and laughing children have all been sighted at this location.

WATCH: Amazon Prime • YouTube
29 Aug 2006
Yvette Fielding and a team of investigators visit Somerset to search for spooky activity at Taunton Castle, where the spirit of a merciless judge is thought to linger.

WATCH: Amazon Prime • YouTube
26 Sep 2006
Yvette Fielding and a team of investigators visit Chambercombe Manor in Devon, the former residence of Lady Jane Grey, where a previous owner once found a skeleton in a secret chamber.

WATCH: Amazon Prime • YouTube
24 Feb 2009
Yvette Fielding and a team of investigators visit Wookey Hole in Somerset, which is reported to be the location of numerous paranormal occurrences, including the 'Wookey Witch'.

WATCH: Amazon Prime
15 Dec 2009
Yvette Fielding and a team of investigators visit the 18th-century home of Edward Jenner, whose research led to the eradication of smallpox.

WATCH: Amazon Prime • YouTube
02 Jun 2010
The team visits Berkeley Castle in Gloucestershire, said to be home to the spirit of Edward II, who died there in 1327.

WATCH: YouTube
16 Apr 2020 • Location Details
Karl Beattie and Stuart Torevell embark on one of their toughest investigations at the now abandoned prison in Gloucester, where staff and inmates have reported paranormal activity.

WATCH: YouTube
27 Dec 2020 • Review • Location Details
Yvette Fielding assembles her team for a massive two-part Christmas investigation at the foreboding and now disused Gloucester Prison. The vast site is said to be one of the most haunted places in Great Britain, a place that is seen death, fear, pain, suicide and incarceration. Eerily, the prison is built on the rotting corpses of many prisoners, making this a place with a dark and sinister energy and one to be feared.

WATCH: YouTube
28 Dec 2020 • Review • Location Details
The second part of Yvette Fielding and the team's Christmas investigation of the imposing and abandoned Gloucester Prison. An allegedly haunted location that was originally built as a county jail and for over two centuries housed murderers thieves and the violent of every kind, but HMP Gloucester wasn't just a jail for the convicted to serve their terms, it was also a place of execution over with over 120 convicts paying the ultimate price for their crimes here.

18 Mar 2022
Part one of a two-part 'Most Haunted: Extra' which see Karl Beattie and Stuart Torevell take on the fearsome Dorchester Prison, a place that tests the ghost hunters to the limit.

19 Mar 2022
In the second part of Karl Beattie and Stuart Torevell's investigation in Dorset, they soon realise that they're not alone in the wings of the imposing Dorchester Prison.

Most Haunted Live! Terror At Torbay

12-14 Mar 2005 • 3 Nights • The Best Of Most Haunted Live: Volume 4
The Most Haunted Team are spending the Weekend in South Devon at Torbay and Brixham. Famous for its history of smuggling from ships, as well as other dark goings on around the area. What will they find out as they explore the Lupton Hall, a house built in the late 1700's? What disaster befell the Hall? And who are the spirits which refuse to leave?
Lupton House, Brixham
The Globe Hotel, Brixham
Brixham Heritage Museum, Brixham
The Smugglers' Haunt, Brixham
Berry Pomeroy Castle, Brixham

5-7 May 2007 • 3 Nights • The Best Of Most Haunted Live: Volume 6
The Most Haunted Team travel to Bristol for a three-night live investigation with the hope of uncovering the ghostly history of the pirates that once frequented its coastline and the slavery imposed by them. The city is known for its close links with the renowned pirate Blackbeard and is reputedly rife with ghostly activity.
Blackbeard's House, Bristol
Redcliffe Caves, Bristol
Llandoger Trow, Bristol